A Reflection on the Freshman/Sophomore Evening of Recollection: “I’m Invited to the Table of the Lord" 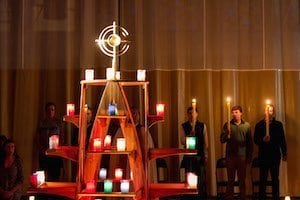 “I’m Invited to the Table of the Lord”
Article by Kevin Glaittli, class of 2018:
On Friday, November 14, 2014, I had the pleasure of attending Kellenberg’s Freshman/Sophomore CROSS Evening of Recollection with my fellow classmates and friends. Having experienced a tough week just prior to this night of prayer, it was the perfect time to clear my mind and spend time in prayerful meditation.
Upon arrival, I was directed to the auditorium where I saw familiar faces and immediately entered a joyful state of mind while listening to the XLT Band playing Christian rock songs. Mr. Moran led a group of games, allowing us to have fun and grow in friendship. The entertainment in the auditorium ended with a prayer. We all made our way to the school cafeteria to eat dinner together before the time of serenity and prayer to which we were all eager to begin.
Before long, dinner ended and everyone exited the cafeteria to begin the faith changing service being held in the gymnasium. The gym was pitch black, the light came from the candles that lined the floor. There was a wooden tower constructed in the center of the room on which more candles laid. This tower eventually held the Eucharist, which was brought in later by a procession. I was one of the first to enter the gym and to take my seat on the floor. It was breathtaking; I was able to see the amazement and excitement on the other students’ faces as they entered and took in their surroundings. The service began with a song as Father Thomas Cardone, S.M. carried the Eucharist in a monstrance led by a procession of students carrying candles. Father Tom placed the Monstrance on the highest point of the Adoration tower. During this time all the students had risen to their knees and knelt until the procession had finished. Mr. O’Brien and Father Tom both shared stories and gave us valuable lessons to take away from the night and to use in our lives as young Catholics. Many songs were played, like “I Lift My Hands” and “The Table” to name a couple.
The lyrics to the song “The Table” call us to the Table of the Lord where there is peace and healing. We are called to come just as we are to God’s Table. While I sat in the back of the room in a state of prayerful adoration focusing on the Eucharist lit at the top of the tower by a spotlight, I saw many students on their knees also in adoration amongst others who solemnly sat. Slowly, student by student rose to their knees until everyone in the gym was on their knees praying and talking to their Heavenly Father.
It was amazing to see that no one was told to kneel, but they did so out of love and respect for the Lord. This was truly inspiring to me! I gave all my sorrow, doubts, and fears to the Lord as I prayed and sung. The night concluded with the procession of the monstrance, led by candles, back out of the gym. A final message was given by Mr. O’Brien and the lights were turned on, and just as peacefully as we sat down in the beginning, we got to our feet and left the gym to go home. I couldn’t have thought of better way to spend my Friday night than completely giving myself to the Lord in prayer, free of all distractions, in a room filled with hundreds of students doing the same as I did. I was truly cleansed and relieved of all my burdens that night. As the song “The Table” says, God will restore and fill your heart with joy, at His Table.