During the 2011 – 2012 school year, both the Junior Varsity and the Varsity squads won the Nassau Suffolk Catholic High School Association Championship at their respective levels with the Varsity team finishing the year being ranked # 1 on Long Island and # 1 in New York State and #49 in the Nation as ranked by ESPN. During the 2012-2013 season, both the JV and Varsity squads won the NSCHSAA Championship again and the Varsity team repeated as NY State Catholic Champs by defeating St. Joseph by the Sea and Font Bonne Academy. The Varsity team finished the season ranked #2 in New York State. In the 2013 – 2014 season, the Varsity Softball team won a 4th consecutive NSCHSAA title and a third consecutive NYS Catholic High School title. The team finished ranked #2 on Long Island and #3 in New York State.

Both the Junior Varsity and Varsity teams travel to Herkimer, New York during the season and participate in the Mudville Softball Tournament. The Varsity team, also participates in an annual team retreat to the Marianist retreat house known as Founders Hollow in Ulster County, New York.

Nine members of the 2019 Varsity Softball Team who earned Easton / NFCA All-America Scholar-Athlete Awards for achieving a 3.5 or higher GPA for the 2018 – 2019 school year.

For additional information or questions, you can email Mr. Conrade, Head Varsity Softball Coach at mrconrade@kellenberg.org.

The Varsity Team is proud to announce a benefit game to be held on Friday, April 5, 2019, at 7:30 PM “under the lights” against the North Babylon Bulldogs on Bob Klein Field (home of Molloy College Softball) in Rockville Centre. All proceeds will be donated to The League of Yes. The League of Yes’ mission is to establish and sustain baseball programs for people (of all ages) with disabilities. The objective is to provide an opportunity for those individuals to experience the joy and benefits that come from playing our national pastime. The league’s players develop social skills and increase self-esteem while promoting community support and sponsorship for the league. There will be a League of Yes Game at 6:45 PM preceding the game between North Babylon and Kellenberg. 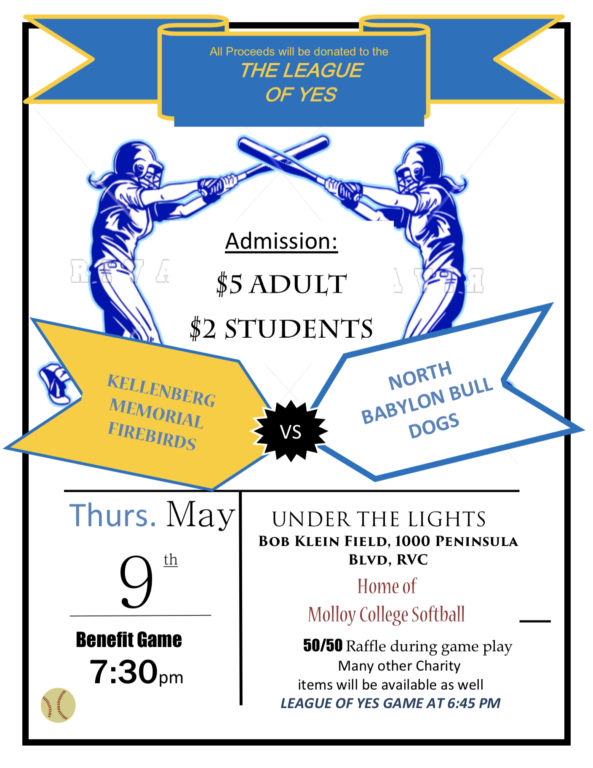