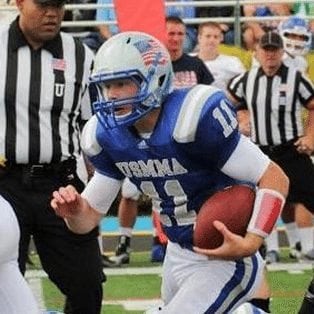 KINGS POINT, N.Y. (Nov. 12, 2014) – Earlier this week, the Liberty League announced its football Performers of the Week for Week 10 and USMMA junior quarterback Matthew McDaniels (Malverne, N.Y.) earned a spot on the weekly honor roll. This is the second time this season that he earned this accolade, as he also did so back on Oct. 20 after his Week Seven performance.
On Saturday at Union College, McDaniels led all players in the game with 162 rushing yards on 19 carries (an average of 8.5 yards per carry). He found the end zone three separate times, twice on the ground on a 54-yard run in the second quarter and a one-yard run in the third quarter and once on a 61-yard reception in the third quarter. That was his first catch since his freshman season back in 2012.
McDaniels currently ranks third in the Liberty League in rushing with 823 yards (91.4 yards per game). He is also second in the league in scoring with 11 touchdowns for 66 points (7.3 per game), while his 884 all-purpose yards is good for fourth in the conference. His 10 rushing touchdowns ranks him 42nd among all NCAA Division III student-athletes and his 823 rushing yards ranks 69th in the nation.
For the complete release from the Liberty League, click here.
McDaniels and the rest of the Mariners return to action this Saturday, Nov. 15, with the 2014 season-finale against St. Lawrence in the 12th Annual Hoffman Cup game. The game is scheduled to begin at 12-noon at Brooks Stadium. Prior to kickoff, the USMMA football program will pay tribute to its seniors with a special Senior Day Ceremony. Live stats and live video will also be available for the contest.