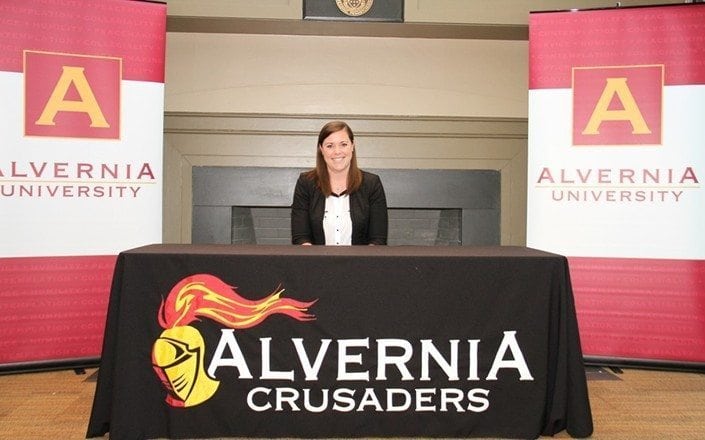 “We are thrilled to announce the hiring of Sheila Cook as Head Coach of Women’s Basketball here at Alvernia,” said Stiles.  “Sheila has experienced success at the highest level in our region and our division.  She was mentored by arguably the best coach in the history of Division III.  Her passion and enthusiasm for the academic and athletic success of our program were extremely evident in the short time we have spent with her, and we are excited for her to get to work.”

Cook takes over a program that made 21 postseason appearances in 26 years. The Crusaders graduate All-Conference performer and Middle Atlantic Conference Scholar Athlete Kaitlyn Yoh, but return six of the top eight scorers from a season ago including leading scorer and All-Conference Honorable Mention center Tyra Roberts.

“I am very excited about the opportunity to be the head coach here at Alvernia and build upon the success of the program,” said Cook.  “I’ve had a chance to meet with the players and we’re eager to get started.”

Cook was a starting forward at Muhlenberg College where she graduated eighth in career scoring with 974 points, and led the Muhls to four NCAA Championship appearances—advancing to the Sweet 16 twice.

She graduated from Muhlenberg with a Bachelor of Arts in English with a secondary education certification.  She pursued a Masters in Education and spent two years as a graduate assistant at Wilkes University.  She served a year as the first assistant for legendary University of Scranton head coach Mike Strong, the winningest head coach in Division III basketball history.

“I’m thrilled for Sheila to have this opportunity,” said Coach Strong.  “She will be a tremendous fit for Alvernia.  She is wonderful to work with.  The players will be very happy playing for her.  It’s a win-win situation.”

As a player at Muhlenberg, Cook was a member of four Centennial Conference Champions, including the conference’s first ever undefeated team when the 2008-09 team finished with an 18-0 conference record.  The Muhls posted a record of 91-23 in Cook’s four years.

In her first year as assistant coach at Scranton, the Royals finished 26-4.  Prior to the 2014-15 season, Coach Strong found it necessary to retire elevating Cook’s responsibilities as the only full-time women’s basketball staff member on campus.  She and a part-time, Interim Head Coach continued the Scranton legacy posting a 24-4 mark, returning the Royals to the NCAA Championships.

The Crusaders are scheduled to tip off the 2015-16 schedule on Wednesday, November 18 at Misericordia University.  The Commonwealth schedule starts at Lycomign College on Wednesday, December 2.