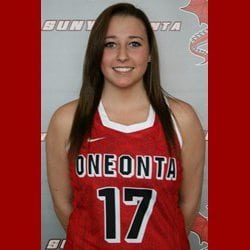 Congratulations to Taylor Casey (’14) on being named Rookie of the Year.
From SUNY Oneonta Athletics:

Casey put forth one of the best seasons in program history for Oneonta. The frosh’s 66 goals are third all-time behind Rebecca Monteith (70 in 2009, 75 in 2012), while her 80 points place her fifth on the all-time single season list. 28 of her 66 goals came in conference play, where she added four assists. She posted a season-high seven goals in the April 21st victory over New Paltz. She converted all six of her shots into goals over Oswego to open SUNYAC play. Starting all 18 games for the Red and White, Casey scored in every contest including 16 multi-goal games. “Congratulations to Taylor on an impressive freshman season. She exploded in our second game of the year and never looked back,” said head coach Alison Pollock. “I bet you will be hearing her name a lot over the next three years, I’m looking forward to coaching her and seeing what more she can accomplish in the future.”