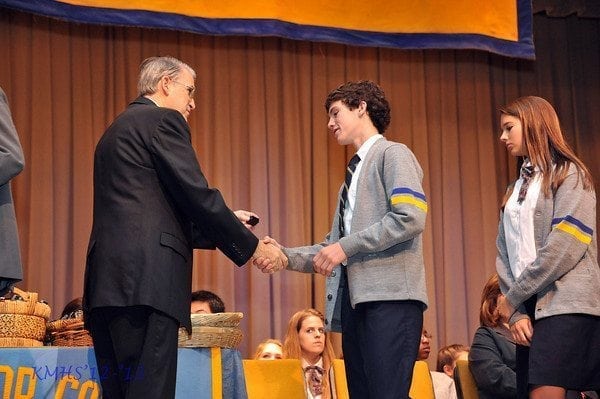 On September 25, 2012, Kellenberg Memorial High School held its annual Academic Awards Assembly. During this time, the faculty awards several students with pins for being included on the Honor Roll and also for having Perfect Attendance during the 2011-2012 school year. Also during this assembly, the several Seniors received a pin for being in the National Honor Society for two years. This year, 47 new Seniors and 248 new juniors were inducted into the National Honor Society which is quite an achievement. Each year the student body and faculty choose a group of students to lead the Honor Society. Congratulations to all those awarded: Patrick O’Hara as President, Elizabeth Magno as Vice President, Brendan Scott Corresponding Secretary, and Gina Cach as Recording Secretary. The Academic Awards Assembly is a great way to reward the students for their academic excellence in their previous school year and urge them to do even better this upcoming school year!

Article by Gabrielle Harvey, Class of 2015