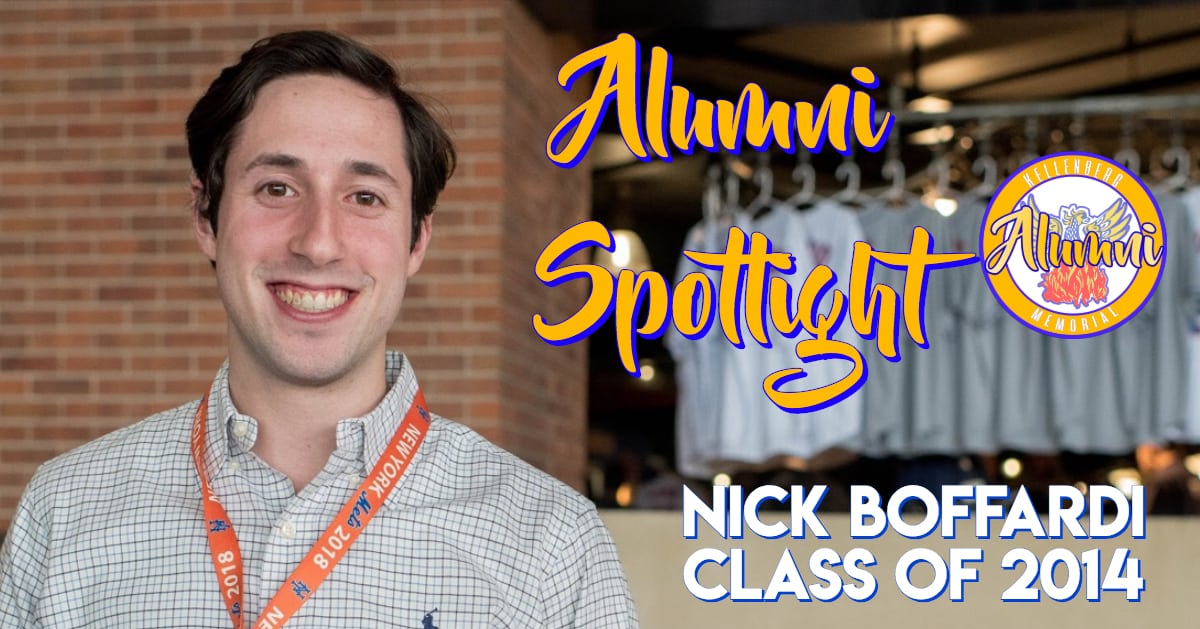 Nick Boffardi ’14 recently began a new position as a Video Producer at Sports Illustrated TV, where he is responsible for the preparation, production and editing for the shows that stream on their website si.tv, and on Amazon.com.  In addition to this full-time position, Nick also balances a number of other professional responsibilities, such as serving as a member of the game day production staff for the New York Mets and as a production coordinator for NYCB Live at Nassau Coliseum.  He also served as a videographer and editor at Kellenberg Memorial throughout his three and half college years. Nick holds a Bachelor of Arts degree in Television Production from Hofstra University with a concentration in Production and Post-Production and was an active member of ETV and Auditorium Services (among other things) during his time at Kellenberg.

How did Kellenberg Memorial shape who you are today?
I’ve been a part of the Kellenberg community for over a decade now. I started with the Latin School in 6th grade in 2007, graduated in 2014, and worked with the ETV Technical Staff until I got my full time job offer from SI.  Nearly everything I’ve done to this point has been influenced in some way by Kellenberg Memorial. As a student I was able to find what I loved in ETV. It gave me the confidence to pursue what I enjoyed doing. As a Catholic, Kellenberg allowed me to learn about my faith and carry it with me into my community and in college.  When I became a staff member, I was able to pass my knowledge to the students and help them learn as much as they could.

How did Kellenberg prepare you for success in college and in your career?
Kellenberg has done so much for me on so many different levels you could probably write a whole piece on that alone. Starting with the academics, while the material of each class is important to know, what’s more important is how I went about learning it all. I had to manage my time effectively and learn how to prioritize projects or papers. It was important to learn how to make time to study and not allow that time to interfere with sports or clubs. Balancing ETV with schoolwork and sports was the groundwork for my entire college life. As a senior Kellenberg, I learned how to be a leaders while serving as a Marianist Mentor for Mr. Kirk’s 7th grade homeroom (and now I feel old because those kids are going to be seniors this September). As a staff member, I was not only able to continue to lead and set an example for the students in ETV, but it also allowed me to mentor them and teach them what I knew. In television a producer is perhaps the most critical element to any successful show. We are responsible for all the content that fills an episode. We come up with everything from topics and themes for shows, to guest bookings and even the design of the set. All of these pieces require strong organizational skills, attention to detail, and the ability to work with others. Kellenberg was the perfect place to learn these skills as they were incorporated into the curriculum both directly, in the likes of group projects, and indirectly, where I had to know myself enough to be able to determine what methods of organization worked best for me.

Kellenberg prepared me for nearly all aspects of college. Academically, I felt Kellenberg was far more difficult than any class I took in college. I had some college finals that were 50 scantron questions and 2 essays, which by Kellenberg standards should be able to be completed in 38 minutes (and usually done faster than that). Trimester and Comprehensive Examinations are in a class of their own in comparison. I learned how to interact with peers and teachers and how to navigate social situations outside the classroom. When I took my Intro to Studio Production class at Hofstra in my first semester, 95% of the material was what I had already learned through ETV. Coming back as an alumnus to work with the Technical Staff allowed me to put into practice the things I was learning at Hofstra. It not only gave me a place to refine my skills but it also allowed me to produce various types of videos to show as part of my professional experience.

Kellenberg teachers never wanted us to feel like we couldn’t we ask for help, which is what makes them so different. I’m sure nearly every teacher says that, but even the nicest teacher in the world can’t force a student to come for something as small as extra help. It’s the atmosphere at Kellenberg which allows students to feel comfortable in approaching a teacher to discuss what they’re struggling with or perhaps talk about what they’re really good at and enjoying in the class. Kellenberg teachers leave lasting impressions on their students which many of us carry to college. Kellenberg teachers want us to succeed after college and they love to hear how well their alumni are doing. Having been part of the Kellenberg family, I was able to approach my professors and have an open dialogue about what was going well or not so well in a given class.

You made a gift in support of this year’s Day of Giving.  Why do you think it’s important to give back to Kellenberg?
It’s so important to give back because it’s the way we’re going to help shape the future. Tuition isn’t cheap by any measure, and Donations from alumni can help Kellenberg continue to be an affordable option for families seeking a Catholic education. The building as we know it is essentially at capacity and while we make the most of the space, could we do better? The facilities may need to be upgraded or expanded in the future to allow students to get the most out of their education. Giving back can help Kellenberg continue to invest in their students’ futures. Donating as a recent graduate and making a consistent donation for the next decade or so could very well mean that my kids will be looking at a drastically improved Kellenberg Memorial (physically) from the campus I knew as a student.

Who was your favorite teacher/class, moderator/club, or coach/team when you were a student here, and why?
Jeff Harris and ETV were and are my favorites from when I was a student. When I say ETV, as much as I mean the club itself, I also want to include the people that were part of it because they were the essence of the club. Our first studio was in a literal closet in the back of the auditorium. There were maybe a dozen kids in the club when I joined. I came in as a freshman only knowing that I liked shooting video. I looked up to the juniors and seniors in the club who were there every day morning and afternoon, taking care of anything that had to be done. They’re a big part of the reason I’m in this field and have the work ethic I do. Jeff was always involved in the club and one of the first things he said to me when I joined was, “Get comfortable with being uncomfortable.” You can’t be shy in this industry and he tried to teach that from Day 1. He wanted us to push our boundaries because it was the only way to learn. He had an idea of what I was capable of and knew how to push me just enough to get a little extra out of me. He was my mentor for high school and one of my biggest supporters when I said I was going to pursue television production in college. When he hired me at Kellenberg, it came with one caveat: I couldn’t stay forever. He was right and I’ve been fortunate that other opportunities have come up that I couldn’t pass on.

You graduated from Hofstra a full semester ahead of your peers.  How did Kellenberg play a part in that accomplishment?
As a senior at Kellenberg Memorial, I was offered the opportunity to take some of my classes for college credit.  I took 3 credits through LIU-Post for our English class. We had a guest professor visit and lecture a few times throughout each trimester.  I also took Father Philip’s LS Latin 12 class for 6 credits. While we did do some conjugating of verbs or declining of nouns, this class was different from any other Latin class I had taken at Kellenberg. On the first day of school each student was given a binder probably 2 inches thick filled with information not only about Latin, but about Roman and Greek culture too. It was more of a Classics focus than it was about the Latin language. Fast forward to college, where a BA degree in TV Production requires 124 credits. At least 94 of those credits had to fall into Hofstra’s liberal arts designation. Among these 94 credits were core requirements in subjects like math, science, social studies, literature and a foreign language. I called up both St. John’s and LIU-Post to get copies of my transcript and have them sent to Hofstra, and within 10 days I received an email confirming the credits were accepted. The summer after my freshman year, I took a 3-credit writing class over the summer. The following summer, I went abroad to Italy where I took another 3-credit course. With those two summer courses, plus my credits from high school, I had a total of 15 credits not taken in my spring and fall semesters. It actually moved me a semester ahead and my junior year I took two semesters of 17 credits. Entering the Fall 2017 semester I needed just 16 credits to complete my degree and I graduated that December. That was very important for a few reasons. First, it saved money as I didn’t have to pay or take loans for another semester of college. And secondly it allowed me to apply for jobs beginning in October and list a possible start date in January instead of June. I had nearly a 6 month head on my other classmates in my job search. I interviewed for Sports Illustrated TV in March, something I might have been able to do if I were still in school. However they were looking for someone to start as soon as possible so when they called me and offered the job I was able to say, “I’ll be there Monday,” instead of trying to delay it until after finals.