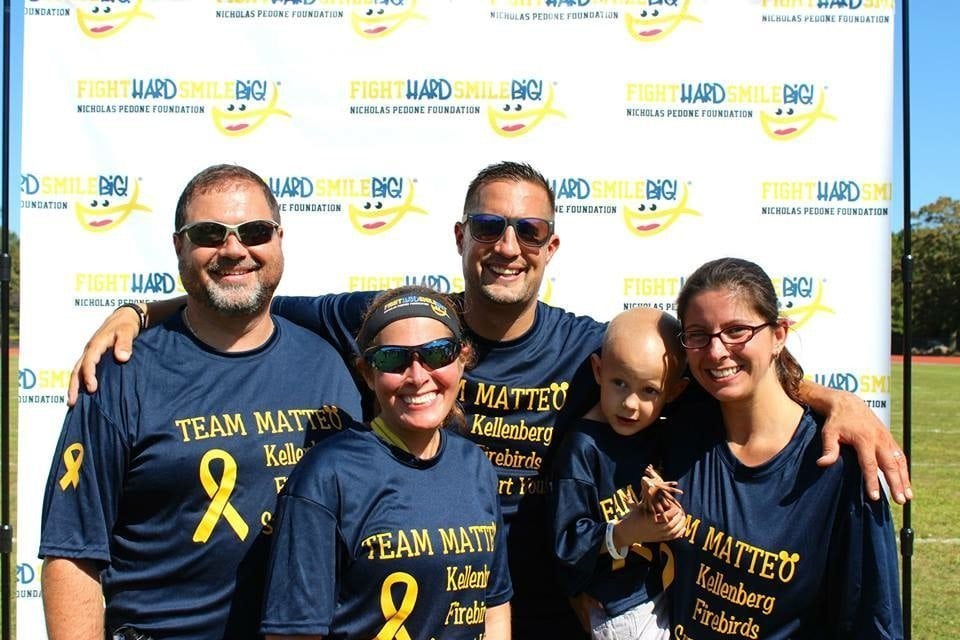 On September 6, 2015. Stephanie Eschenauer Makar (class of ’92) organized “Team Matteo” to join the 3rd Annual Nicholas Pedone 5K in Glen Cove, New York, run by the Nicholas Pedone Foundation: Fight Hard Smile Big.  The Nicholas Pedone Foundation was been established in memory of “Sweet Nicholas” who lost his fight with Stage 3 Neuroblastoma, a rare childhood cancer.  After a short 7-month battle, Nicholas earned his angel wings on May 26, 2013. Nicholas was 7 years old.
Nicholas’ smile was contagious.  It was his smile that captured the hearts of many. Nicholas’ smile gave strength to everyone around him.  In loving memory, the  hope of the foundation is to to spread Nicholas’ smiles onto other children fighting cancer and provide emotional strength and support to their loved ones. Steph ran this 5K last year and for this year’s third annual, reached out to all Kellenberg alumni and their families to join the team in support of Matteo Rizzi, son of class of ’92 Pasquale Rizzi, to come run, walk, cheer on Team Matteo.
Pasquale’s son Matteo is 3 1/2 years old and was diagnosed with Wilm’s Tumor when he was 2 years old. Matteo has had two surgeries and had one of his kidneys removed. During his 1st surgery, his tumor ruptured. He had a second operation to remove a piece of his lung a couple of months later when it showed that it spread.
After 33 weeks of chemo treatment, with his final chemo on August 10th, today Matteo is cancer free!
Matteo’s all time favorite Disney character is Mickey Mouse. Make-A-Wish Foundation is sending Matteo and his family to Disney in October for Halloween. Matteo is very excited!
The Nicholas Pedone Foundation named Matteo their 2015 Honorary Child and at the event, Matteo was recognized, honored, and also handed out the medals to the 5K winners.
The support was extremely overwhelming and with the help of alumni Greg Bodkin (Class of ’92), t-shirts were made and purchased for the team and anyone who wanted to support Matteo. Team members from Kellenberg included Steph Eschenauer Makar (’92) (Team Captain), as well as her husband Joe and mom Donna Eschenauer, Pasquale Rizzi (’92), wife Stefanie, and their families, Greg Bodkin (’92), Tara Fitzgerald (’92), Ed O’Neill (’92),  his wife and daughters, Christine Ferrier Finneran (’92) and her husband and children, Samantha Losurdo (’92), Ervie Augustin (’92), as well as many alumni who weren’t able to attend including Meredith Brosnan Arbia (’93), Tina Manzo Caliendo (’92), Kim Mancuso (’92), Kwasi Aird (’92), and Deb Delgrasso (’92).  Many alumni have already reached out to join us next year and we are really excited!
The weather was beautiful, there were tears, smiles, high-fives, and an overwhelming amount of support throughout. We couldn’t have asked for a better day to honor little Matteo. Anyone who would like to participate next year is asked to reach out to Steph Makar at Smakar@uchc.edu