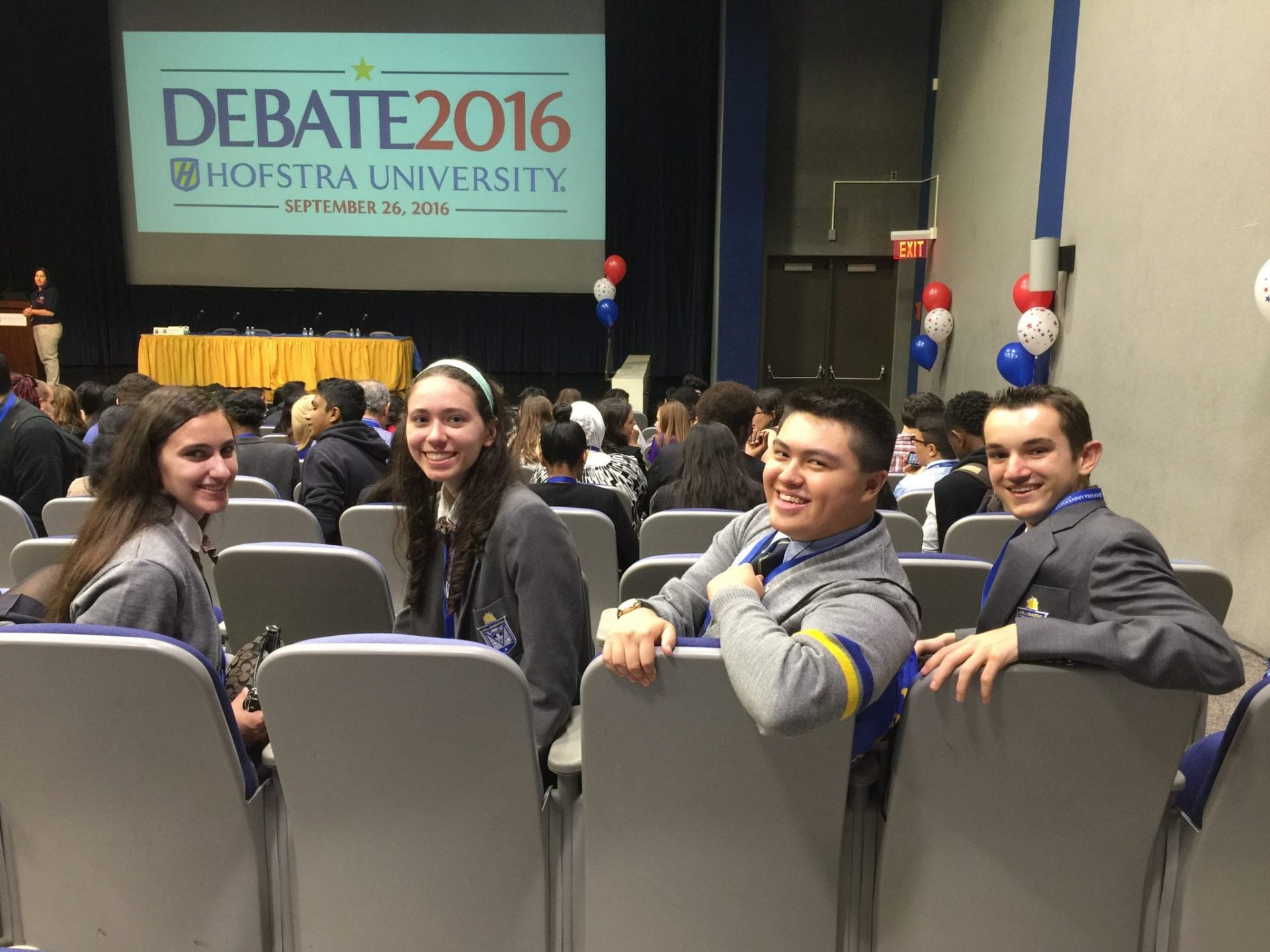 Article by Faith Agolia (’18): On September 26, 2016, five members of the Debate team embarked on a journey to Hofstra to witness history in the making. Upon arrival at South Campus, four other debaters and I, accompanied by Mr. Cioffi, were welcomed with open arms by members of the Hofstra staff, who coordinated the special program for high school students. Throughout the day, we participated in several different sessions, leading up to the grand finale in the evening.
At 11:15 a.m., we strolled across campus to the Student Center Theatre for a media panel, featuring Lawrence Levy, Rita Ciolli, and Jared Rizzi. The panel brought to our attention many topics Donald Trump and Hilary Clinton needed to address for the night’s debate. At 12:15, we grabbed a bite to eat and made our way to Intramural Fields, where we were drawn back to the Elections of 1872 and 1972 in the Chautauqua tradition entitled, “Democracy in Performance.” Prominent figures of the past- Shirley Chisholm, Victoria Woodhull, Frederick Douglas, Susan B. Anthony, and Judge Ward Hunt were portrayed by living history performers in an effort to raise the issues of women, voting, race, and the roles they play back then and in the world today. At 2:00 p.m., the debate team then jumped at the chance to walk around Broadcast Plaza. There, they collected pens, pins, and free merchandise, alongside snapping photos with Uncle Sam and posters of Clinton and Trump. At 3:30 p.m., we proceeded to head over to the Netherlands complex, where ABC was preparing for the live broadcast. At 4:00 p.m., Hofstra students surrounded the complex, thrashing vibrant, red and blue balloons. After munching on some cookies, the debate team trekked back to the Student Center Theater to listen to the CNN Digital Correspondence Experience, in which a team of CNN media staff discussed both the positive and negative effects media has placed on the candidates. After the informative session, we eagerly awaited dinner in Memorial Hall/Bits and Bytes where a delicious meal of pizza and pasta was presented.
Around 7:30 p.m., the team went back to Student Center Theater, where a Hofstra professor gave an introduction to the debate and watch party. After a few mock debates by students, the wait was finally over. As Hofstra tuned in to C-Span, all the students in the room anxiously held onto their seats. The excitement and tension in the room as the countdown began was absolutely astonishing to experience. As soon as Lester Holt announced the start of the ninety-minute debate, the entire room erupted in roars, heard continuously throughout the evening as students’ favorite candidates made a well-rounded point.
After 11p.m., the weary members of the team ambulated to the bus with heavy hearts, disheartened to see the day come to a close. The privilege of being present at this debate enabled me to discuss and have an impact on the future of our country. This experience will remain a vivid memory of mine for years to come.
Categories: Activities, Kellenberg FeaturesSeptember 28, 2016
Tags: Speech and Debate
Share this post
Share on FacebookShare on Facebook TweetShare on Twitter Pin itShare on Pinterest Share on LinkedInShare on LinkedIn