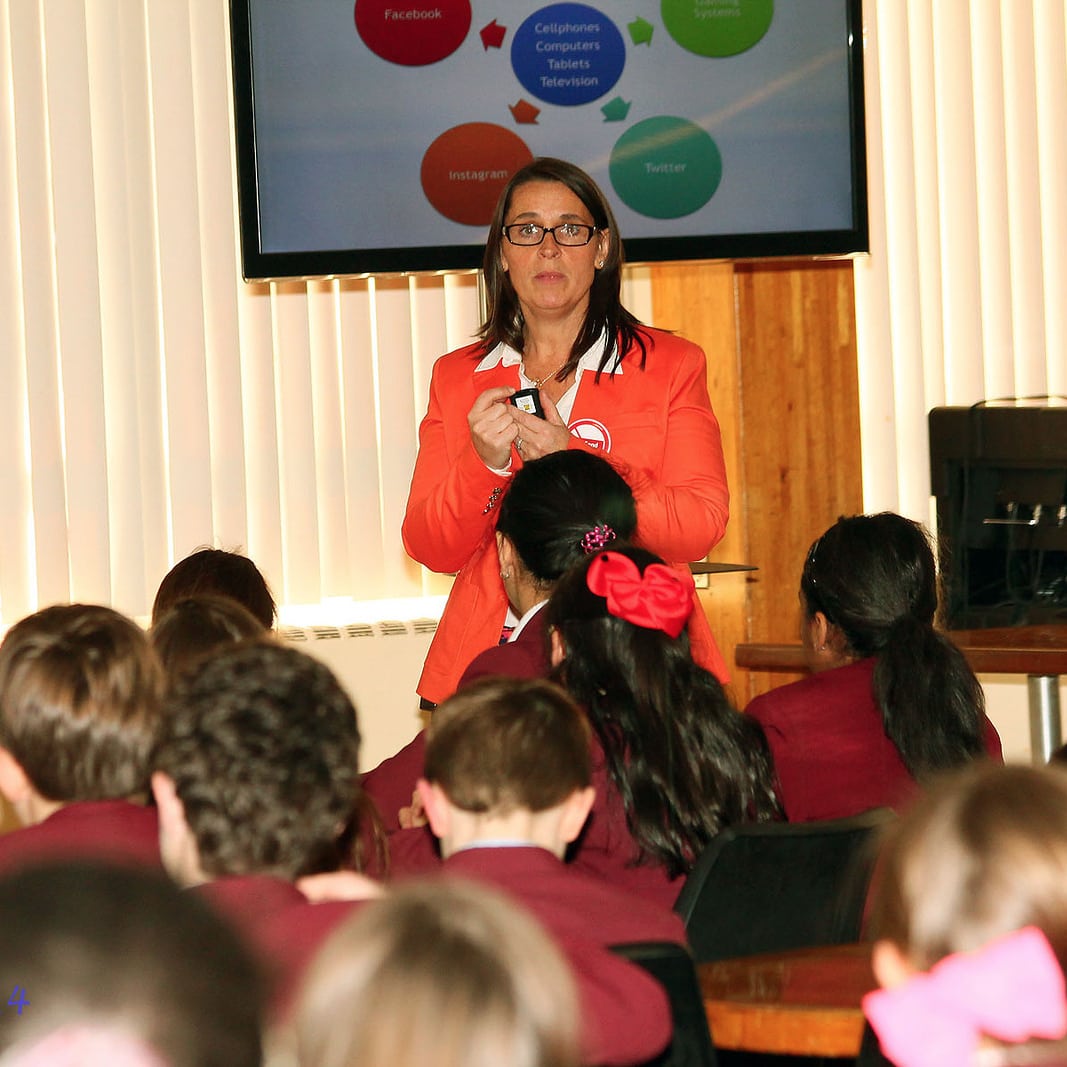 Article by Madison Callinan, class of 2018:
On Wednesday March 26, 2014, the Latin School student body gathered for a “Don’t Press Send” assembly in the cafeteria. Special guest, Mrs. Schumacher, gave a PowerPoint  presentation to, “educate and provide guidelines to help students use electronics carefully and safely.” Latin schoolers were asked a series of questions, and Mrs. John, walking around with the microphone, engaged students to become a part of this interactive program. Many questions were discussed, such as what type of social media do students use. Numerous responses included Instagram, Twitter, and Snapchat, which usually do not require age verification. Students learned that there are no “private chats,” because someone else could easily snapshot your comments or save a bad picture, then forward it, or mass text it, to anyone. Many students did not realize that once it is out there, you can never get those pictures or comments back. It is permanently accessible and viewable for the world to see. Years from now, colleges and prospective employers could also see that same photograph or text, which could ultimately ruin your career plans and change your life.
Another topic in the assembly included online “friends.” When asked who they would consider as a friend, many Latin schoolers responded with answers like “a trustworthy person,” or “someone who is always by your side.” Mrs. Schumacher then asked, “Are the 500 plus people that follow you, truly your friends?” She pointed out that all of these people now have access to your person information such as your address, relatives, and family. Would you really genuinely trust all of those 500 plus people with your private information?
Next, Mrs. Schumacher talked about the power of the written word. A text or comment is all received through personal perception. The same text can be interpreted in many different ways, whether it be mean, sarcastic, or genuinely kind. The sender does not have any control over who the recipient forwards the text to, and again, the message is out in cyber world forever! So, think before you send!
Then Mrs. Schumacher highlighted the infamous “like button.” Is happiness and confidence about your experiences or your achievements depend on how many “likes” you get? If so, she noted that you could be crushed and saddened by a low number of responses. In addition, peer pressure often causes problems online. Stories of tragedy and death from young adults affected by cyberbullying are now surfacing. Often people have more confidence behind a screen than when confronting a person face to face. This can lead to hurtful insults that may not have been said in real life situations. Mrs. Schumacher then informed us of the New York State Dignity Act. Since July, schools are now held accountable for cyberbullying and other internet incidences. We learned that these situations of cyberbullying will go on our permanent record, and could taint our years of hard work at Kellenberg.
On World Youth Day in 2013, Pope Francis addressed the “saints of the 21st century,” saying, “We need saints to live in the world, to sanctify the world and to not be afraid of living in the world by their presence in it. We need saints that drink Coca-Cola, that eat hot dogs, that surf the internet and that listen to their iPods. We need saints that are open sociable normal happy companions. We need saints who are in this world and who know how to enjoy the best in this world without being callous or mundane.” In addition, Mrs. Schumacher concluded her session by reminding us to follow our morals, to decide right from wrong, and to think before pressing Send!