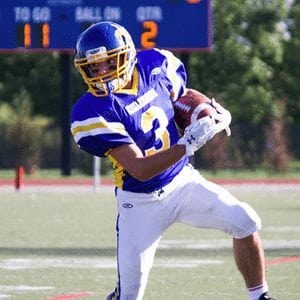 Article by Ismenia Ginebra, Class of 2018:

Imagine the sun is shining, a cool breeze is blowing, and you are gathered together with all your friends. Put this all together, and you get the perfect day for our annual Homecoming Game. This past Sunday, October 5, our Varsity football team took on the Hackley Hornets from Tarrytown at the Mitchel Athletic Complex. The stadium was filled with students from all grades, and even some Kellenberg teachers and families, all in their Kellenberg attire, showing off their Firebird spirit as they awaited the great game ahead. When everyone had arrived and found a seat with their friends, it was time for our Firebirds to make their entrance by running through a banner held by the cheerleaders! To start the game, senior Natalie Gallego lead everyone in singing our national anthem. Then, the game began!

During the halftime show, the Varsity Cheerleaders and Varsity Dance Team gave a stellar performance. With the cheerleaders showing off all their skills and the dance team performing their routine, the halftime show was great display of the hard work they put in preparing for the season.

In the third quarter, with 6:12 remaining, junior Jason DeLucia scored a 47-yard touchdown, putting the Varsity team ahead by 10-0. But, the most intense quarter was by far the fourth quarter! Putting a temporary damper on the excitement, the Hackley Hornets’ 15-yard touchdown midway through the fourth quarter cut the Firebird’s lead to 3.

With two minutes left, the Hackley Hornets charged down to Kellenberg’s 30-yard line, but with a fourth quarter surge of strength, junior Anthony Leone sacked Hackley’s quarterback. On the next play, senior Nolan Duschere and junior Jesse McGlone finished the defensive stand, forcing a fumble, recovered by McGlone on the 10-yard line. And that’s how the Homecoming game came to an end with the final score being 10-7. Congratulations to the entire Varsity Football Team for playing an amazing game!

The Firebirds definitely proved that with perseverance and hard work, they can accomplish anything. Freshman Madison Callinan remarked that, “Homecoming was not only a social event, but a unique opportunity to come together as one student body and show off our spirit. The pride you felt as a student was just amazing.” This homecoming was great to be a part of, and I encourage everyone to go with your friends and family in the years to come!