Firebirds Rally Their Spirits for 2014 Homecoming 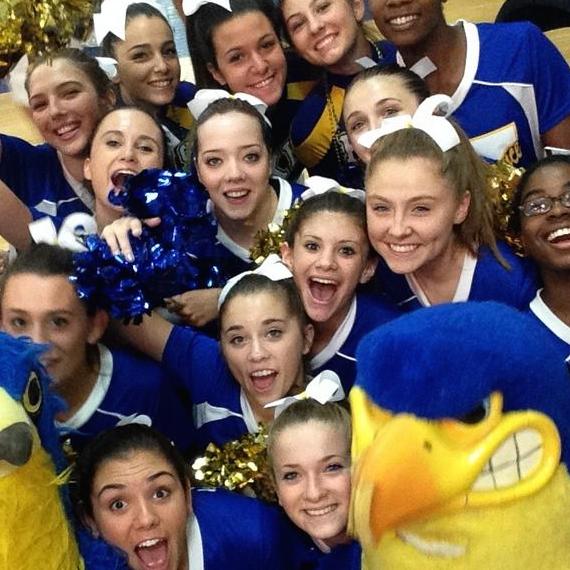 Article by Kennedy Murray, Class of 2016:
After days of building excitement, Kellenberg’s spirit week came to a captivating climax on Friday, October 3rd with the Fall Sports Pep Rally. Leading up to the momentous occasion, the day was full of tangible eagerness as athletes proudly traded in their blazers for jerseys. This was merely the icing on the cake, after a week’s worth of enthusiastic commercials airing each morning following morning announcements, promoting school spirit and the pep rally on Friday.
When the time finally came, the gymnasium seemed to come alive, as seniors and juniors piled in. All the while, the freshmen-sophomore pep rally commenced in the auditorium, as did the Latin School pep rally outside on Mathew Field.
With all the universal buzz surrounding the World Cup this past summer, it came as no surprise that the highly-anticipated event would make its rounds to Kellenberg’s very own gym as well. This year’s Fall Sports Pep Rally theme was none other than the World Cup. If you hadn’t managed to see the countless FIFA-themed posters in the hallways, a few minutes into the pep rally would make it clear.
Sticking true to its inspiration, the pep rally kicked off with a parade of our fall athletes, with each team representing a competing country. To top it off, a Brazilian flag, doubling as a cape, and a boisterous vuvuzela seemed to seal the deal.
Following a warm introduction, everyone in the gym was treated to an impressive performance by the Girls’ Varsity Dance Team. With choreographed dances to songs such as “I Will Never Let You Down” by Rita Ora and “Work” by Iggy Azalea, the team was not only prepared to, but also succeeded in blowing away all those watching. With spirits high and the energy even higher, the games began.
The Girls’ Soccer Team and Varsity Cheerleaders combined forces to represent the Brazilian team, as Girls’ Tennis, Volleyball, and Gymnastics joined to make up the US team. The round ended with “Brazil” in the lead, the score a promising 2-0. The next few rounds consisted of coalitions of other teams, including: Girls’ and Boys’ Cross Country, the Football Team, and the Swimming Team, all battling it out for the coveted championship. However, the chance would go to the “Netherlands”, headed by the Boys’ Soccer Team, and the impenetrable “Brazil”. The final few minutes were saturated by an enthralling intensity, as the two went head-to-head. After a nail-biting round, cheers erupted for the victorious “Brazil”. The Girls’ Soccer Team and Varsity Cheerleaders were awarded with a crafty replica of the World Cup trophy—one that could easily rival the original.
Adding to thrill of the moment, the pep rally was brought to a close by the Varsity Cheerleaders. Performing one of several well-known routines, the girls showcased their talent with a Kellenberg crowd-pleaser. It was the perfect ending to yet another pep rally.
By creating a larger sense of school spirit and praising the dedication of our fall athletes, the fall pep rally was a fantastic way to end the week on a high note.