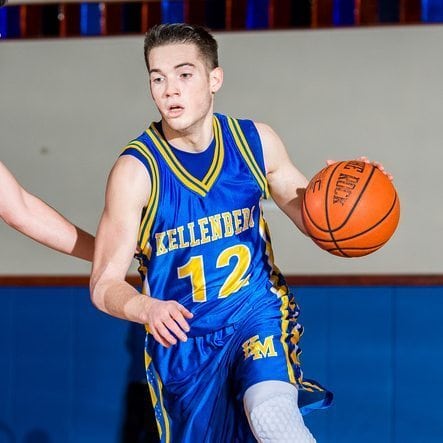 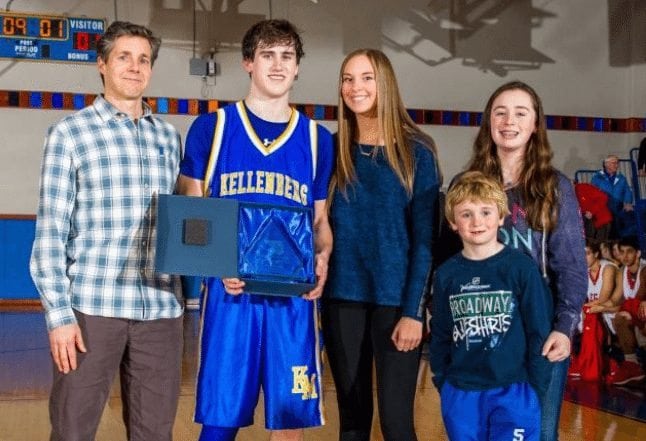 Kyle DeVerna recieves the awared for Most Valuable Player of the game. Pictured here with the family of Tom Crotty following Kellenberg’s victory. (Credit: Steven Ryan)

Article by Sabrina Zaffiro, Class of 2016:
On Saturday, January 24, Kellenberg hosted the 13th Annual Tom Crotty Classic Basketball Tournament. Games are held yearly to commemorate and celebrate the life of Tom Crotty, who was tragically killed during the September 11 attacks.
Living in Rockville Centre and attending Maria Regina High School, Class of 1978, Tom Crotty never lived a dull moment. He was a standout four-year basketball player at Maria Regina, earning himself the prominent title of “All Long Island”. In addition to basketball, Crotty also enjoyed water sports, running, tennis, and golf. However, his passion was always basketball. This sport taught him the great moral values and disciplines that set the tone for his lifestyle. It was his first love and shaped him into the wonderful person that he was. He went on to play basketball at Marist College, Class of 1981, and earned a full scholarship after making the team as a walk-on. He was married to his wife, Joanne, for sixteen years and had two daughters, Catherine and Caroline, both of whom attended Kellenberg Memorial High School. Crotty was the Managing Director for Sandler O’Neill Partners and was working on the 104th floor of the South Tower of the World Trade Center on September 11, 2001. He was forty-two years old.
The tournament in Crotty’s honor had been held at many venues since its establishment, including St. John’s University, Hofstra University, and Adelphi University, until it returned to where it belongs, home at Kellenberg, where it has been for the past five years. In the first game of the tournament, South Side High School defeated Chaminade High School by a score of 63-58. Kellenberg swept Regis High School 76-68 in the second game. Firebird Kyle Deverna was awarded game MVP with 22 points and 8 assists. Steve Torre also scored a game high of 28 points with 6 assists. Head Coach McCutcheon noted that a large, enthusiastic crowd was present for both exciting games of the tournament.
Following the final game, ten of Crotty’s teammates who had attended the tournament posed for pictures with the current Kellenberg Boys Varsity Basketball Team at half court. The event was then followed by a reception in the millennium room as a social gathering for Crotty’s teammates, friends, and family.
The Tom Crotty Classic Tournament embodies and sustains all of the crucial elements that composed Tom Crotty’s life. Tom Crotty’s legacy will live forever between the sidelines of the Kellenberg basketball court.
Categories: Athletics, Kellenberg Features, School NewsJanuary 29, 2015
Tags: AthleticsBasketballboysmaria reginaTom CrottyVarsity
Share this post
Share on FacebookShare on Facebook TweetShare on Twitter Pin itShare on Pinterest Share on LinkedInShare on LinkedIn