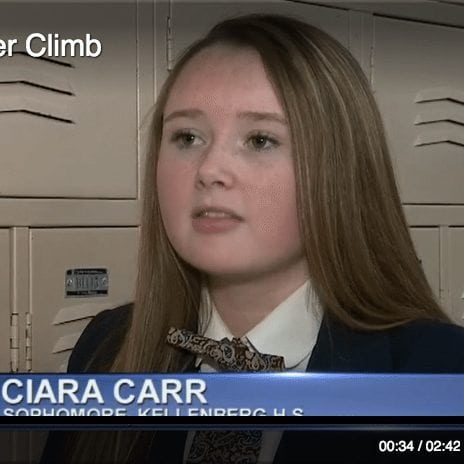 NEW YORK (FOX 5 NEWS) – A race to the top of the World Trade Center has a very special meaning for some people at a Long Island high school.
“The Tunnel to Towers run has always been a part of my life,” Ciara Carr, a sophomore at Kellenberg High School, said. “Ever since I was a baby it was our Christmas card!”
Ciara has been participating in the Tunnel to Towers races before she could even walk.
“I think I’ve done it since I was in strollers,” she said. “When I grew up and actually learned what I was doing, when I was about at 6, I saw this run was affecting everyone’s life.”
Ciara was just a baby on 9/11 but her father, Chuck Carr, made it a priority to teach his kids about those who sacrificed on that day.
“The firemen and the first responders that were down there and what they were going through, they were heroes, what they were taking on,” Chuck said. “I want my kids to know the sacrifices that our soldiers, that our firemen and our first responders make for us.”
One of the teachers at Ciara’s school is giving the same lesson to his students. Jack McCutcheon teaches American history and is the dean of students at Kellenberg High School, but he spent the first half of his career working in finance.
“I worked on Wall Street for 25 years, and while I was on Wall Street I was working in the World Trade Center,” he said. “On 9/11 I was in the towers when the plane hit.”
McCutcheon was on the 60th floor when the plane hit Tower 2 and barely made it out alive. He only speaks about his experience once a year, on 9/11.
“I go through the day of what happened to me, where I was and basically how it affected me and how I got through the day,” McCutcheon said. “Most of the students, it takes a whole period discussing it, most of the student, by the time the class has ended you can hear a pin drop.”
McCutcheon shares his story so his students never forget.
“Ciara is an example of young people keeping alive the memories of those who died that day,” McCutcheon said. “I think it’s very important that we don’t forget.”
Ciara will climb 104 floors and 2,226 steps on May 15 to honor those who were lost, just has she has done every year.
“Never forgotten, it should always be in the forefront of people’s minds to know what happened to us and what we’ve overcome,” Ciara said.
Ciara has no plans of stopping these races anytime soon. She plans to pass this tradition onto her own family one day to help keep the memory of 9/11 alive.