Freshman & Sophomore Classes Are Cautioned of the Dangers of Drug Abuse 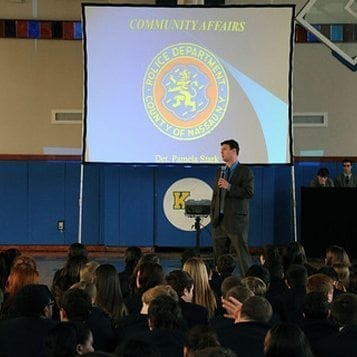 Article by Julie Scuderi and Owen Clark, class of 2016:
On Wednesday, March 26, the freshman and sophomore classes of Kellenberg Memorial High School gathered for an assembly. Detective Pamela Stark, a native of Long Island, shared many accounts of the horrors of drug abuse, and provided advice to the ninth and tenth graders on how to avoid drugs altogether.
Pamela Stark attended the Police Academy for almost eight months before she began her work as a detective in the 8th Precinct. She explained to the students the importance of following your gut during times of difficulty. She informed the students that in order to be able to stand up for yourself and resist the pressures of drugs, you must have confidence and self esteem. By the end of her presentation, she had given the students many keys to resist drugs, as well as a new outlook on the terrors of addiction.
Detective Stark talked about legal drugs sold at local pharmacies called opiates that can be just as dangerous as heroin. However they are sold at pharmacies in almost every town. She then briefly talked about the very prominent drugs of choice for high school students, alcohol and marijuana. The main drug Detective Stark stressed was the more socially acceptable and less commonly thought drug, Adderall. This drug’s main use is to treat adolescents who suffer from ADHD and ADD in order to help them focus. She talked about how even adults don’t understand how to properly administer this drug. Some parents give it to their kids just to do better on the SAT’s.
Detective Stark then described many true stories of regular teens who became wrapped up in drug addiction, and before long, they were trapped. A teenage girl from a suburb outside Minneapolis became addicted to heroin accidentally. Believing that she was smoking “hash,” a bi-product of marijuana, while at a college party, she was actually taking her first “hit” of heroin, and became addicted. Over time, her addiction grew, and eventually, she needed twenty one hits a day, which she attained by taking one thousand dollars a week from her parents. Because heroin is one of the most addictive substances known to man, she is still in and out of treatment facilities and rehabilitation centers. Many people wonder why heroin continues to become more and more popular, despite its being so deadly. Detective Stark explained that it is cheaper and easier to obtain than many other drugs. Consequently, overdoses are higher than ever.
Pamela Stark also shared a cautionary tale about a young couple and their addiction to Vicodin. David Laffer, who was prescribed Vicodin for a hockey injury, fell in love with Melinda Brady, who was also prescribed Vicodin for her gum problems. Though neither of them was addicted at the time of their wedding, over the course of two years, they both became full blown addicts. Approximately two years later, David Laffer entered a drug store and, without saying a word, he shot four innocent people dead. He proceeded to steal some Vicodin, and then he left. This horrific drug that was prescribed by his doctor, had changed an innocent young man into a murderer. By telling this heartbreaking story, Detective Stark really instilled the idea that drug addiction can happen to anyone.
Detective Stark concluded her presentation with a statement that resounded in the ears of all who listened: “When it comes to drugs, you cannot ‘dabble.’ There is nothing about them that will not conquer you.” It is very important to inform young people about the dangers of drugs, and Pamela Stark may have prevented future addicts with her honest, eye-opening accounts.