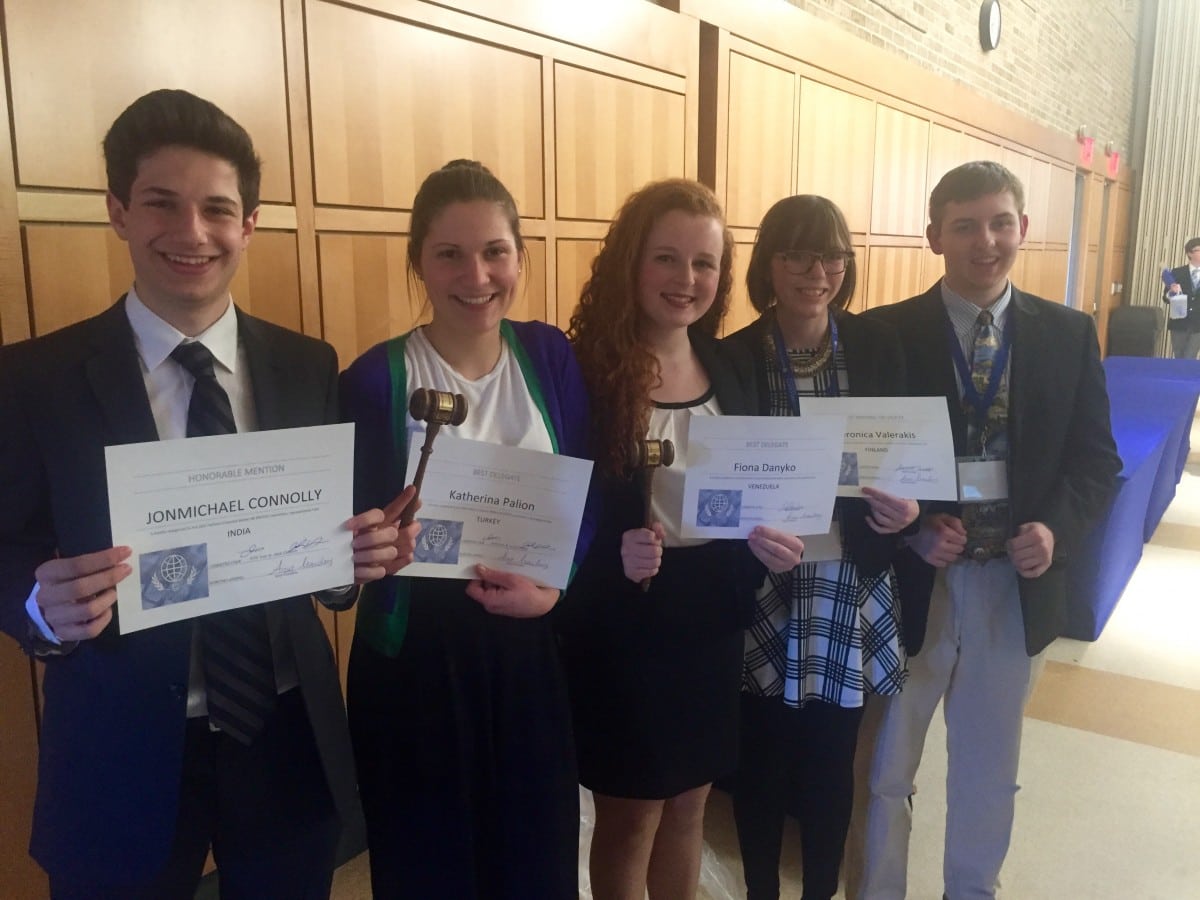 Article by Danielle Santevecchi, ’16:
From Friday, February 26th to Sunday, February 28th, members of the Kellenberg Memorial High School History Club travelled to Hofstra University to participate in their annual Model United Nations conference. With teams from both New York City and Long Island participating, each committee was filled with students eager to debate over controversial world topics. In Model United Nations, participants are assigned a committee and country and they are required to follow the viewpoints of their assigned country regarding their topic. Familiarity with world affairs is usually required though the exciting procedure of debate allows all to participate.
Regular committees involve votes regarding what topic will be discussed and a Chair, always a Hofstra student, leading the flow of the debates.  In World Health Organization, delegates debated over healthcare for refugees and genetically modified organisms. In Disarmament and International Security Committee, delegates discussed small arms trade and surveillance. In Special Political and Decolonization Committee, delegates conferred over mines and ownership of the Arctic. In World Bank, delegates discussed energy and corruption in the developing world. All of these committees hold around twenty-five countries. However, two committees unlike the rest were Historical Crisis and Future Crisis. In these committees, only around fifteen delegates participate. Delegates are kept at the edge of their seat with frequent fabricated press conferences and question and answer sessions with ‘world leaders’.
At Hofstra’s conference, this resulted in constant changes of the direction of debates and forced countries to react to assassinations, kidnappings, and direct threats. When it came time for awards on Sunday, the hard work on behalf of the Kellenberg delegates truly paid off with many students being recognized for their successes. In DISEC, Joe Egan, 16’, received a verbal accommodation as the United States and Veronica Valerakis, 16’, was Outstanding Delegate as Finland. In SPECPOL, JonMichael Connolly, 16’, received an honorable mention as India and Katherina Palion, 16’, received Best Delegate and a gavel as Turkey. Finally in Future Crisis, Fiona Danyko, 16’, received Best Delegate and a gavel as Venezuela. With many seniors leaving behind the Hofstra Model United Nation Conferences as fond memories, this year served as both a bittersweet goodbye for those departing and a fond hello for those starting debate for the first time. With Model UN being one of the most anticipated events for the History Club, next year’s conference cannot come soon enough. “This was my last of four years in Model UN and it’s sad to say goodbye.” Said Patrick Pallisco, 16’. “I’ll never forget all the fun countries I met and the memories I’ve made.”