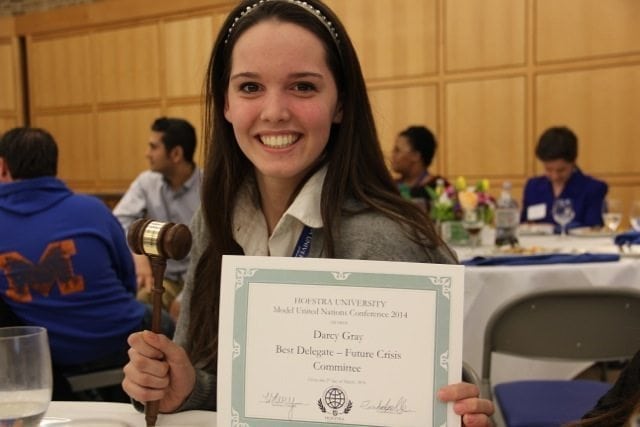 Article by Cara Lee, class of 2015:
The weekend of February 28th a group of Kellenberg students went to Hofstra University to participate in the 3rd annual Model United Nations conference, called the H.U.M.U.N. conference. At this conference the students who attended were assigned countries and separated into six different sub committees where they each took their assigned countries views on different real world problems. The students then spent the weekend debating over solutions from problems ranging from World War III to the issue of the Kurdish people in Syria, Turkey, Iran, and Iraq. At the end of the conference, on Sunday March 2nd, a lunch was held where awards were given out to the best student- delegates. Out of twenty eight awards and honorary mentions, Kellenberg received twenty five percent. Nick Poveromo, Liam Flanagan, Peter Herzog, and Fiona Danyko all received verbal recognitions while Thomas Ferrall received an Honorary award, Brendan Deery the award for most outstanding delegate, and Darcy Gray, while celebrating her 18th birthday, received the award for Best Delegate.