Ines Ramirez-Heitner, '97: Marketing in the Arena 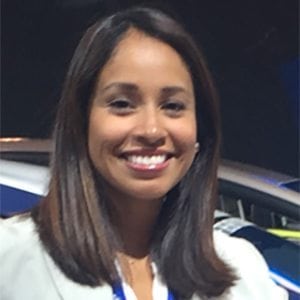 by Kurt Gottschalk
Ines Ramirez-Heitner’s career path has taken some unexpected turns since she was a marketing major and a competitive swimmer at St. John’s University. Among other stops, that path has brought her to Adelphi University, first to pursue a graduate degree in sports management and then to teach as an adjunct professor in the Ruth S. Ammon School of Education.
She was coaching swimming for the summer after graduating from St. John’s in 1997 when the father of one of her students, who worked as a headhunter, asked for her résumé and recruited her into the world of advertising.
“I was a marketing major with a minor in international business, so I thought I’d be on planes dealing with shipping ports,” she said with a laugh.
Instead, she found herself at advertising giant Saatchi & Saatchi, where her background in sports and marketing made her a perfect fit for one prominent client—Toyota. Indeed, Toyota is now her only client. During her early years representing Toyota, Ramirez-Heitner (who is now the account supervisor) started thinking bigger, from licensing the Toyota name on merchandise to something of stadium proportions—tying in with major sports teams. She started pitching her idea to professional sports organizations, seeking a bigger platform for her campaigns.
“I thought it might be interesting to try to do that in an arena,” she said.
Representing the Greater New York Toyota Dealers Association, Ramirez-Heitner oversees the auto company’s sponsorship campaigns with several pro teams: football’s New York Giants (the “How-To With Eli Manning” spots) and the New York Jets and baseball’s New York Yankees. She oversaw Toyota’s previous campaigns with basketball’s New York Knicks, hockey’s New York Rangers and the New York City Marathon.
Since 2012, she has brought the benefit of her experiences to Adelphi, teaching Sport Alliances and Sponsorships to students in the Department of Exercise Science, Health Studies, Physical Education and Sport Management.
“I bring a lot of what I work on into the classroom so the students are not completely sideswiped when they get out there, like I was,” she said. “I felt like my undergrad and graduate studies were more textbook vocabulary and no ‘real-life’ examples. One of the main topics in my class is what my current Toyota sponsorships are doing, and I ask the class what would they do differently. I ask them to present their ideas in a business type of environment—suit and tie, etc.—so they can have an example when they eventually go into the real world.”
Her work in the field enables her to bring new ideas, such as different ways of using social media, into the classroom, she said.
“Every year [there’s] something different with technology,” she said. “[Students] need to keep up and that can translate into a sports sponsorship.”
Ramirez-Heitner is also excited about the use of new technology in education—in particular, the online courses for the M.S. in Sport Management that Adelphi introduced in Spring 2015.
“It’s a good move,” she said. “They’ll get students from different areas of the country [who] can contribute to classes. I’m really intrigued to see how this works out. I think nothing but positive can come of it.”