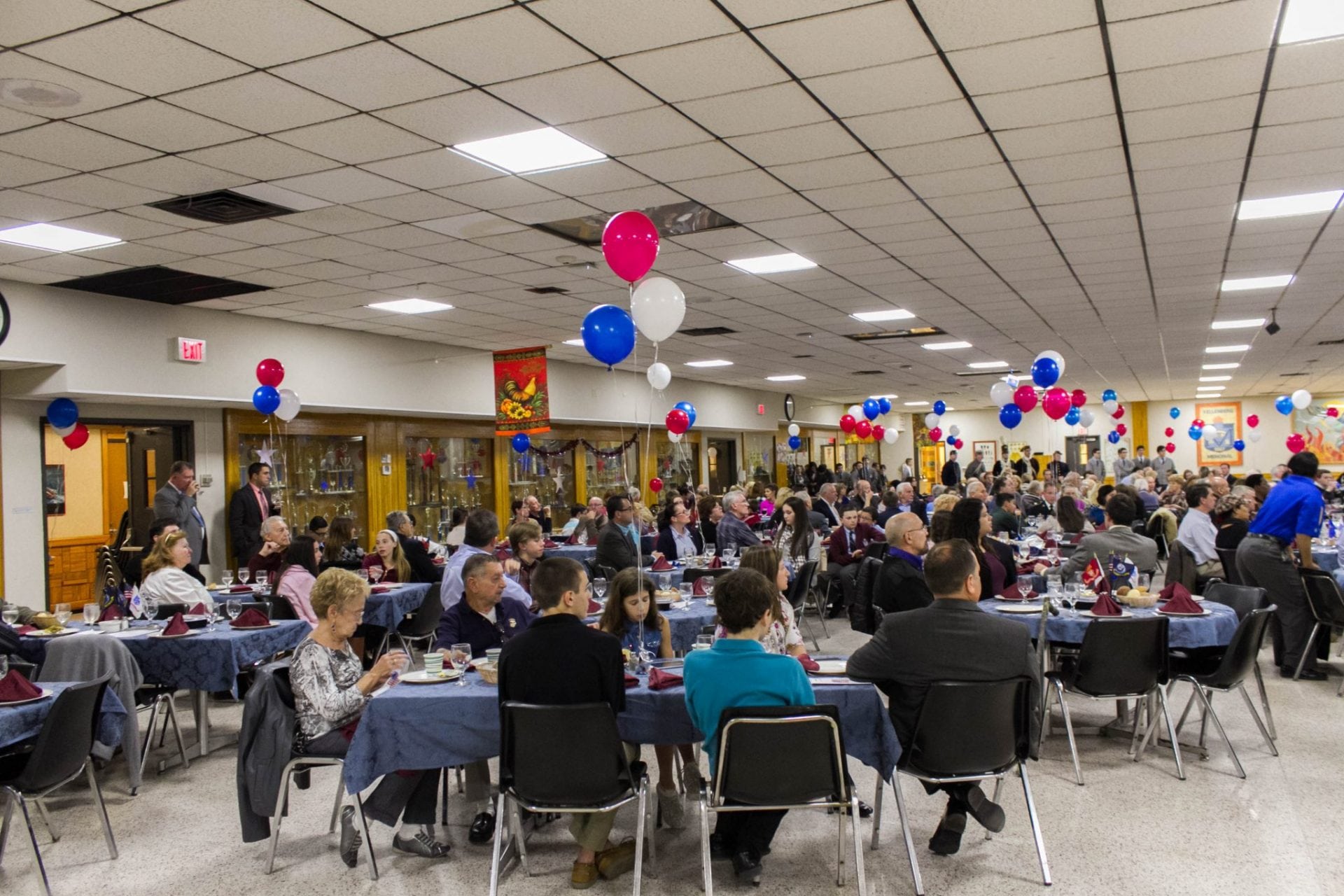 Article by Cara Lee, Class of 2015:
For the past fourteen years Kellenberg has honored Veterans by hosting a Tribute Dinner and, year after year, the dinner leaves a long lasting impression on both the veterans and on those who participate. This year well over eighty Veterans attended with their families and brought along memorabilia from their time during the war, contributing to a showcase that spans across the cafeteria. Some of the memorabilia is also donated by Kellenberg faculty and students including, but not limited to, Vietcong flags, honorary medals, and camouflage blankets. It is one of the most exciting part of the night for the History Club, only outdone as they see how honored the dinner makes the Veterans feel. Many of the Veterans who attend were never thanked for all that they did, especially those who fought in wars like Vietnam where so many people were opposed to the war that they would disrespect the soldiers as retaliation.
For the second year in a row, senior Stefania Marchitelli had the honor of being the Mistress of Ceremonies and began the night by welcoming the Veterans and introducing senior Brigid Maelia and History Club Officer and fellow senior Taylor Catalano to deliver the evening’s invocation. Brigid delivered the annual Prayer for Our Troops while Taylor opened her prayer with a poem dedicated to the troops, both safely at home and overseas, thanking them for fighting to protect the United States. This was followed by the serving of dinner and an inspiring performance given by the Jazz Chorus consisting of favorites like “Route 66” and “The Boy from New York City” that had the audience happily singing along.
The dinner then took a more solemn note as junior Miles Velez, a Junior Navy Sea Cadet, recited the POW MIA speech. He spoke of a table set up in the front of the room, set for one, and set with the glass reverted to show that those who are Missing in Action or who were made Prisoners of War cannot toast with us. Throughout the evening, the white clothed table was left empty, representing the seat where those missing could be sitting if they were home.
Then the first of the student-given speeches were given as President of the History Club Cara Lee gave the welcoming speech, followed by senior member Brandon Kinsler who blew the crowd away with a speech dedicated to his uncle who had fought during a time where African Americans were treated horribly. His uncle’s inspiration to fight and perseverance to continue fighting, despite how people were treating him, came from speeches made by Martin Luther King Jr. and President John F. Kennedy. Brandon’s speech earned both him and his uncle, who was in attendance, a standing ovation.
As the night concluded, History Club members began to announce each veteran in attendance, handing them a personalized certificate thanking them for all that they had done and continue to do. The certificates were handed out along with letters written by Freshman C.R.O.S.S. members that also thanked our heroes. Senior Thomas Ferrall, the Vice President of History Club, ended the night with a speech on pietas, the Latin word for the concept of filial piety, loyalty, and devotion. A quality that all Veterans in attendance hold in enormous amounts. Students and faculty alike were honored to have some of the Veterans share stories with them, the Veterans were treated like the heroes they are, and their families were delighted that their loved ones were being recognized for their magnificent achievements.
I have attended the Veterans Tribute dinner each year for the past six years and each year I have had the chance to speak with many of the Veterans. They all agreed that the dinner is a wonderful event and many return year after year, bringing others who have served with them. This year the Veterans Dinner had the largest turn out yet with over 300 people in attendance, not including the members of the History club and the faculty who have worked for weeks to organize the dinner. The Dinner occurs each year the night before Veterans Day in the Kellenberg cafeteria.