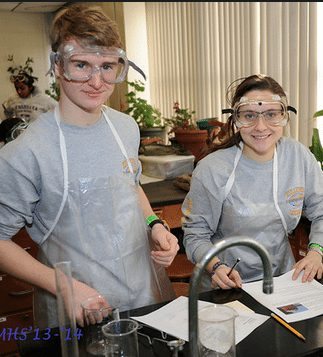 Article by Darcy Gray, class of 2014:
On Saturday February 1, Kellenberg Memorial High School hosted the Western Nassau Division C Regional Science Olympiad Competition. The halls flooded with students from teams representing 18 schools all with one defining feature in common: a passionate love of science.
As enthusiastic and spirited students arrived, they adorned Kellenberg halls with streamers, posters and inspirational messages. Mascots danced through the school, greeting and high-fiving students each wearing their teams cleverly designed science-themed shirts. As the day kicked off, energy was high and lab coats whizzed past when nervous young students rushed off to their events. The moment they had spent endless hours preparing for had finally arrived and it was time for the Olympiads to literally put their minds to the test.
In classrooms all throughout Kellenberg, students took seats next to their partners and were tested on topics ranging from astronomy and forensics to entomology and anatomy. Flipping through test pages, scurrying between lab stations and fixing their eyes to PowerPoint presentations, participants answered hundreds of questions on the scientific fields they had come to love. Meanwhile, in the gym, auditorium, and wrestling room, tensions ran high as the building events took place throughout the day. Students had built balsa wood gliders, magnetic levitation vehicles, and bungee drop mechanisms. The action-packed, fun filled day closed off with an extremely suspenseful awards ceremony.
The students had applied themselves and done their absolute best and with eager chatter they packed into the auditorium and lent their ears to Brother Nigel’s opening remarks. As the regional coordinator for Western Nassau Science Olympiad, Brother Nigel dedicated a tremendous amount of his time and energy to organizing the event and assuring that everything runs smoothly. Mr. Kenneth Karchinski, who also contributes enormously to the organization of Regionals, had the honor of announcing the medal-winning teams in each event. In all 22 events, tests had been scored and ranking s decided and with the students on the edges of their seats, the top 6 teams in each event were announced. Upon hearing their accomplishments, the participants would cheer victoriously and quickly head to the stage where, in an Olympic fashion, their earned hardware was hung around their necks.
Kellenberg triumphantly made a number of these trips to the stage, with the A team earning medals in 17 out of the 22 events, taking home gold in 4 events, silver in 2, and a rainbow of other colored ribbons in the rest. B and C teams also scored very high, taking home 8 medals with B team coming in 8th place overall. The brilliant home team came in with a final score of 59. At a competition where the lowest score is desired, 59 is nothing short of impressive, and earned the team a beautifully shining second place trophy. First Place went to Great Neck South High School’s A team, with a score of 52, only 7 points lower than Kellenberg’s. Chaminade proudly took home 3rd place with Schreiber and Roslyn close behind. These top 5 schools, packed with dedicated members who poured themselves into Science Olympiad, will all deservingly move on to the State Level Competition, where schools from all over New York State will come face to face in one of the most competitive Science Olympiad events in the nation. Where will this thrilling highly anticipated face-off, from which the top 2 teams will move on to Nationals, take place? At a schools that must be able to handle over 60 teams from high school and middle school divisions, and take on the challenge of hosting a hectic competition efficiently of course. Thus, on March 16th, 2014, the New York State Science Olympiad Competition will take place at Kellenberg Memorial High School on Saturday, March 15.