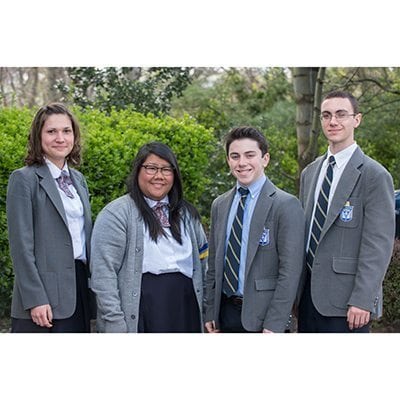 Article by James Hilepo, class of 2016:
On Wednesday, March 25th, Adelphi University hosted their annual Press Day featuring the Quill Awards. Press Day is an event held by the university where high school journalists from many schools in the area gather together to celebrate their work in the field, to honor certain individuals and to learn more about the trade.
The event began with a panel discussion that featured professional journalists who work on both the local and the national stage. Following the panel were breakout sessions. Here, the young journalists were able to gain some more insight into the field from one of the panel members.
After the breakout sessions the attendees enjoyed lunch and settled back into their seats for the award ceremony. Awards were given to the most outstanding journalists in fifteen different categories.
Although the editorial staff of Kellenberg Memorial’s The Phoenix were unable to attend this year’s event, multiple members of the school newspaper received awards. Editor-in-chief Tim McKenna won 2nd place for Best Reporter. James Hilepo was awarded 3rd place for Best Sports Column. Katherina Palion won Honorable Mention in Best Editorial for her article on the Charlie Hebdo massacre and Rachel Buzeta received an Honorable Mention in Best Illustration for her drawing of the Modern Day Sports Hero.
All of the Kellenberg recipients are deeply grateful to Adelphi University for the recognition of their hard work.

The Renaissance: Emma at Sea of Galilee
February 24, 2021
Go to Top