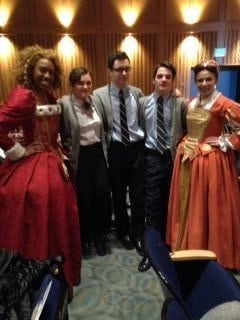 Ah, yes, “All the world’s a stage, and all the men and women merely players….”  Senior English students ventured to the 68th Annual Shakespeare Festival at Hofstra on Monday, March 6th, for a special matinee performance of Hamlet in the newly refurbished playhouse, one that largely resembles the original Globe Theater of Shakespeare’s time.
Prior to the opening scene of the tragedy, the “players,” in full regalia, mingled with the Kellenberg contingent, describing their acting experiences and inquiring about the students’ familiarity with Shakespearean drama.  After the verbal interaction and a brief musical interlude, the action began with the chilling appearance of King Hamlet’s ghost sighted from the balcony area of the two-level stage. 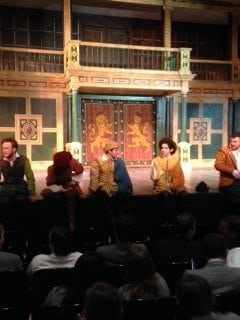 The actors were sensational as the drama came to life.  Indeed, Emily Roff observed, “I had no idea that the words of the play were that sarcastic!  The performers were so sharp with their delivery and voice inflection that the sentiment came through quite clearly.”  Riveting soliloquies by Hamlet, William Ketter, evoked silence from the audience as all theatergoers listened intently to the young man’s conflicting emotions.  Ophelia’s mental collapse, captured so powerfully by Samantha Haviland, shocked the audience as they witnessed her physical and emotional demise.
Like any good Shakespearean play, the moments of comic relief provided a brief respite from the heaviness of the drama, and students enjoyed the sycophantic behavior of Rosencrantz and Guildenstern and the incisive commentary of the Gravedigger. 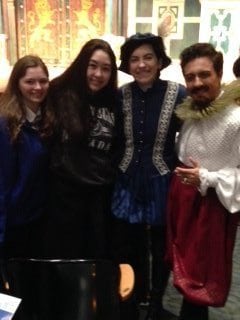 Because the playhouse is designed to mirror the experience of seeing the play in the original Globe–no roof, open air–there is little or no lighting, other than the house lights. Electing to perform the show in this manner forces the theatergoer to pay even greater attention to the lines of verse as the poetry itself becomes, in effect, the necessary “special effects.” There is no better way to spend an afternoon, therefore, than to listen to the lyrical words of the Bard and to witness those words come to life through the voices of an exceptional cast!