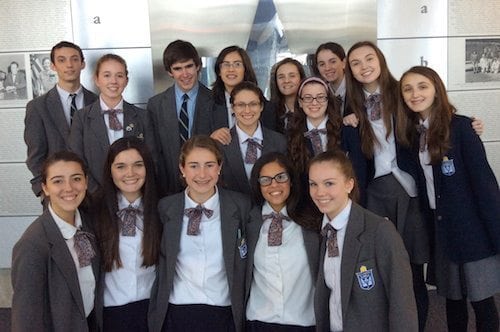 Article by Deirdre Lewis, Class of 2016:
Steve Jobs once said, “Let’s invent tomorrow instead of worrying about what happened yesterday.” On Monday November 17, Mrs. Perrone accompanied fourteen Kellenberg sophomores and juniors interested in pursuing careers in math and science to the Cradle of Aviation Museum for the STEM Presentation, allowing them to pursue the ideal Steve Jobs eloquently expressed. STEM, which stands for Science, Technology, Engineering, and Mathematics focuses on developing the future through these four aspects. When we arrived, we were seated in the Imax theatre and given information and booklets regarding STEM. We were greeted by key-note speaker, Haze Gal, who is the Vice President of Sales and Marketing for Precision Gear Incorporated. Ms. Gal explained that she was one of fifteen children and grew up extremely poor on a farm in upstate New York. Although no one in her family continued education after high school, Ms. Gal aspired to attend college. Having no way to pay for her education, she joined the United States Air Force. The Kellenberg students, myself among them, were deeply moved and inspired by Ms. Gal’s ambitious attitude, even when the odds were stacked against her.
After Ms. Gal’s speech, the Kellenberg students traveled to the museum’s forum, where twenty-two different companies based associated with STEM offered instruction. We were given fifteen minutes at each table. Each company gave a short presentation on their company and also showed us samples and models. A personal favorite of mine was the Arkwin Industries table. Arkwin Industries is a leader in custom designed, precision hydraulic, and fuel system components for civil and military fixed-wing aircraft, helicopters, spacecraft, turbine, and engines. I also found the North Shore LIJ Health System Table to be of interest. An OR nurse from LIJ showed us tools that doctors use to perform surgeries. We also used a program on iPads, allowing us the opportunity to simulate an emergency surgery. Other companies that we visited were Cox and Company, Composite Prototyping Center, Lockhead Martin, 106th Rescue Wing Air Guard, and Spectronics Corporation.
After finishing each station, we enjoyed a brief lunch break and then headed back to school. The STEM program truly broadened our horizons and exposed us to carriers to which we might have otherwise been unaware. I am genuinely grateful that I had the wonderful privilege of attending the STEM program, as it has inspired me to look forward to future advances, unhindered by restraints of the past.