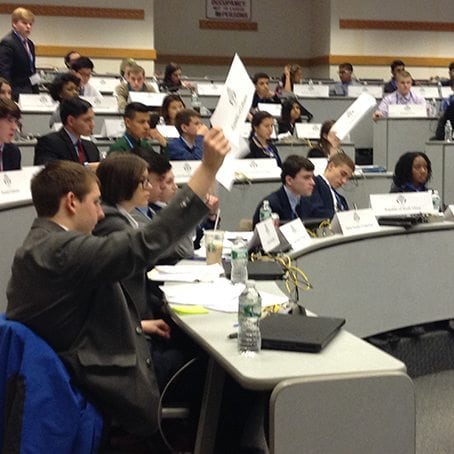 Article by Thomas Ferrall, Class of 2015:
Over the weekend of February 27, Kellenberg students traveled to Hofstra University to compete in their 4th Annual Model United Nations Conference. Schools from all over Long Island came to participate in this yearly competition. The conference was divided into 6 committees: Future Crisis, Historical Crisis, Special Political and Decolonization Committee (SPECPOL), Disarmament and International Security Committee (DISEC), Legal Committee, and World Health Organization. Kellenberg students were present in every committee, representing countries such as Poland, Ireland, and Turkey. Topics ranged from nuclear and chemical weapons to women’s health and vaccines.
On Friday afternoon and Sunday afternoon, there were opening and closing ceremonies, respectively. At both ceremonies, a keynote speaker delivered a speech that focused on the real United Nations and the issues they deal with. At the opening ceremony, the keynote speaker was Gerton van den Akker. Gerton is part of the European Union delegation at the United Nations, and has played a pivotal role in their relations over the past 20 years. At the closing ceremony, the keynote speaker was Dr. Robert Brinkmann. Dr. Brinkmann is a professor in the Department of Geology at Hofstra University, as well as serving as the Director of Sustainability Studies and Research at the National Center for Suburban Studies. He delivered a speech that focused on the ways to encourage sustainability around the world.
There were five committee sessions in total, each lasting about 2-3 hours. In those sessions, delegates tackled the issues presented by their committee. All delegates used the rules of parliamentary procedure, which helped keep the debates civil and organized. At the end of the last committee session on Sunday, all the delegates trekked across Hofstra’s campus to enjoy the closing lunch. At the lunch, awards were given out for every committee. Junior Fiona Danyko, who represented the People’s Republic of China in Future Crisis, won an Outstanding Delegate award. Senior Luke Porcari, who represented Syria in DISEC, won an Honorable Mention. Junior Katherina Palion, who represented the Republic of Poland in the Legal Committee, won a Verbal Commendation.
Senior Cara Lee, who represented Ireland in the World Health Organization, said, “Model UN has taught us how to be better leaders and is great preparation for any field we go into later in life.” Junior Danielle Santevecchi, who represented the Russian Federation in the Legal Committee, remarked, “Model UN was rewarding, not only because we made new friends, but also because we learned about countries all over the world.” The 2015 Hofstra Model United Nations Conference had a great impact on delegates representing countries around the globe.