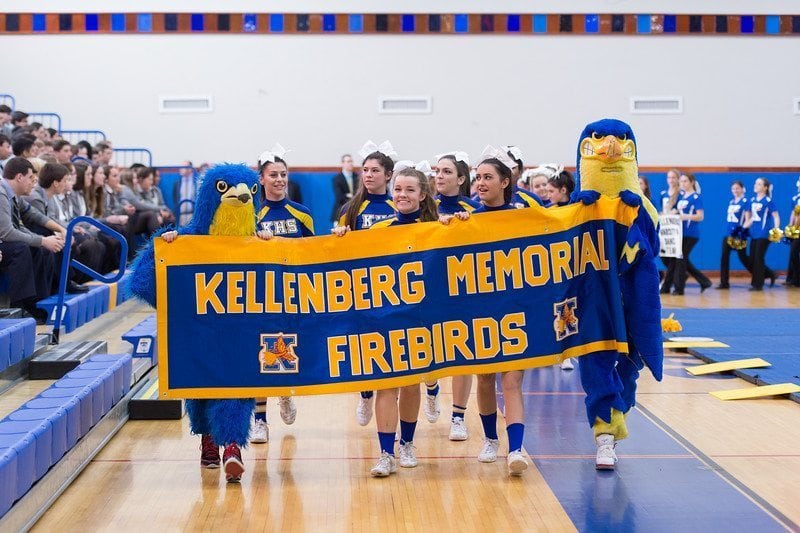 Article by Marissa Cubillos ‘17:
On Friday, January 15, the junior and senior divisions of Kellenberg gathered together in the gymnasium to express their pride and spirit in their winter athletes. The afternoon started off with the varsity winter athletes making an entrance into the gymnasium with their signs of what sports they participated in, with their teams following behind them. The sports that the pep rally was celebrating were boys varsity basketball, girls varsity basketball, girls varsity track and field, boys varsity track and field, boys varsity wrestling, boys and girls varsity swimming and diving, boys and girls varsity bowling, girls varsity cheerleading, and girls varsity dance.
The afternoon was hosted by seniors Steven Torre and Vicky Sapraicone, who both play on the varsity basketball teams. Banter between Sapraicone and Torre, questioning each other’s basketball skills and accomplishments, entertained all gathered in the gym before the “halfsketball” game competition began.
The game of halfsketball consisted of a 4 on 4 game of half-court basketball. It was interesting to see different athletes from different teams come together as their own team to try and compete against the other team. The game consisted of three rounds with different members of different sports.
Two amazing shots were made by junior Morgan Staab, who showed off her amazing basketball skills at the spirit rally and showed us why she is one of the top 50 best girls basketball players on Long Island.
Each team and its members were announced and called up to take a team picture in front of the beautiful blue and yellow balloon arch created by the junior G.S.O., which is moderated by Mrs. Prosceo and Mrs. Bernardini.
Following the halfsketball game, senior Chris Turner was chosen to take 3 half court shots, and if he made one of them, he would win a car. He got a 4th chance to shoot, given by his fellow classmates, but did not make the shot. But, he did win a Matchbox car.
Overall, it was an amazing afternoon which reminded us of the overwhelming spirit and pride that students have in their school.