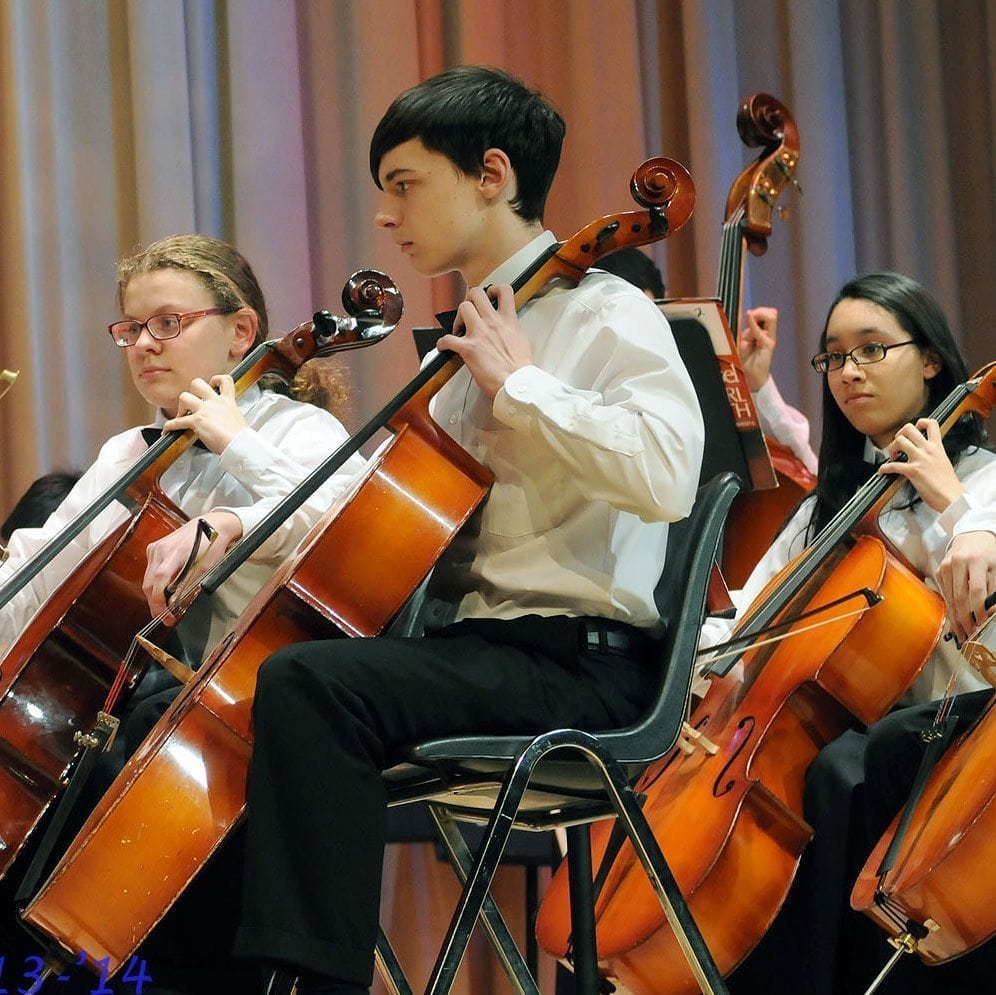 Article by Emily Matassa, Class of 2015
There is no better way to spread Christmas cheer and than the Kellenberg Winter Concerts. A series of three different concerts encompassing the majority of the student body occurred during the week of December 8th. Each night, family and friends eagerly filed into the auditorium in anticipation for concerts to start. The Latin School Christmas Concert took place on Wednesday, December 11th. All students in grades six, seven, and eight participated in this concert as members of either the band, chorus, or orchestra. Performances were given by the sixth grade chorus led by Mrs. Zider, the seventh and eighth grade choruses led by Mrs. Tochelli, the Praetorian orchestra conducted by Mr. Taffet, and that Praetorian and Centurion Bands conducted by Mr. Narell. To conclude the concert everyone preformed “We Wish You a Merry Christmas.”
The next night, December 9th, was the Firebird Christmas Concert. The ninth and tenth grade Firebird Chorus, led by Mr. Blanton, serenaded the audience with popular carols such as “Baby, Its Cold Outside” and “We Need a Little Christmas.” Members of the chorus also took up positions on drums and other various percussion instruments to accompany the traditional African carol “African Noel.” Mr. Taffet conducted the Firebird Orchestra through the traditional Christmas songs “All Through the Night” and “A Christmas Suite.” Members of the Firebird Band led by Mr. Vegas performed arrangements of “A Drummer’s Christmas Carol” and “Happy Christmas War Is Over.” For their final performance all three groups combined for the “Christmas Finale” which contained the well loved songs “Joy to the World,” “It Came Upon a Midnight Clear,” and “Oh, Come All Ye Faithful.”
Friday, December 10th was the next Christmas Concert and the final night of musical entertainment. The concert opened with members of the Phoenix Chamber Ensemble, led by Mr. Taffet, performing songs such as “Fantasia on Greensleeves (What Child is This)” and “Elegy for String Orchestra.” Next, members of the eleventh and twelfth grade Phoenix Chorus, led by Mr. Blanton, entered while singing “Carol of the Bells.” They also are performed musical setting of the well known story “Twas the Night Before Christmas” and finished with a medley of the popular carols “Joy to the World” and “Go Tell It on the Mountain” featuring solos by Junior Hannah Pipa and Seniors Alexandra Belzie and Michelle Joseph. From there, the Phoenix Band, led by Mr. Vegas, took the stage. They performed songs ranging from the gentle lullaby “Away in a Manger” to the upbeat “Stars and Stripes for Christmas.” At the conclusion of the concert, the Phoenix Band, Chorus and Orchestra joined together in “A Jubilant Christmas” which consisted of the three carols “Hark the Herald Angels Sing,” “We Three Kings,” and “Angels We Have Heard on High.” The months of preparation by all groups was richly rewarded by the thunderous applause that ended each concert.
For the past five years, I have been a member of the Kellenberg Music Program through my participation in various choruses. I have truly gained so much from taking part in the chorus program. I was taught the basics of reading music and correct singing posture so that I could be a better musician and active contributor to the chorus. I’ve also learned the importance of group cooperation. As our conductor, Mr. Blanton, always says, “There is no ‘I’ in chorus, but there is an ‘us’.” Many of my friends are people that I never would have met if we had not been in chorus together. The best part of my day is going to chorus class and being able to just relax and sing. The members of the Kellenberg Music Program use their talents in the most wonderful way: to praise God, for as it is commonly heard in Kellenberg, “When you sing, you pray twice.”