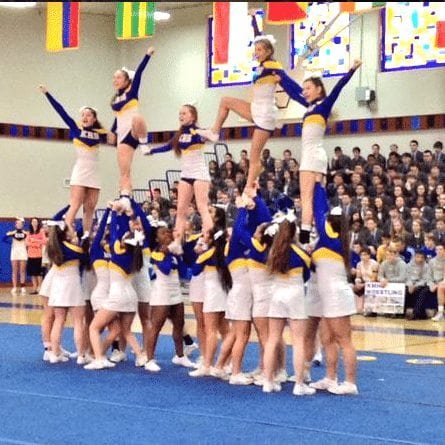 Article by Sabrina Zaffiro, Class of 2016:
The Kellenberg Winter Sports Pep Rally took place on Friday, January 16. The purpose of the pep rally is to gather Kellenberg students together to celebrate the athletes in the current sports season and get motivated for the remaining season. Commercials for the pep rally were featured every day on the morning announcements video feed leading up to Friday’s events.
During the varsity rally, all winter sports teams played against each other in a competitive four-on-four basketball tournament. Two members from each sports team were chosen to compete in the tournament. That way, each four-person tournament team was made up of members from two different sports teams, giving each tournament team a variety of skill sets.
To start the pep rally, athletes from every winter sports team marched around the gym in a parade-like fashion, showing pride for the sport that they play. One member from each team led his or her group carrying a poster that read the name of the sports team that he or she plays for. At the conclusion of this procedure, the varsity cheerleading team took the floor and put on an excellent performance in which they demonstrated their deep-rooted school spirit. Then finally, the games began.
After every game, the names of the teammates of the players participating in the basketball tournament were read. Seniors from each team were called up to receive a special Kellenberg key chain to commemorate their last year of high school.
At the conclusion of four highly competitive four-on-four basketball games, the combined boys varsity basketball and girls varsity bowling team swept the competition and took the first place trophy. Each member of the team showed superb dexterity and each contributed to the overall victory. As a result of their win, the names of both the boys varsity basketball and girls varsity bowling teams will be engraved on the coveted pep rally trophy which is displayed in school year round. To conclude the rally, the girls varsity dance team put on a performance that showcased the dancers’ exceptional talent.
During the Freshman and JV Pep Rally, both athletes and non-athletes competed in a re-creation of the television show, “Minute to Win It”. Students were called up from the audience to play in challenges featured on the show. As signified by the title, each team competing had just one minute to complete a difficult physical challenge and earn points for its sports team.
The Kellenberg Pep Rally was designed to ignite passion and inspire both athletes and non-athletes alike. The entire school looks forward to a successful winter season and many more to come.