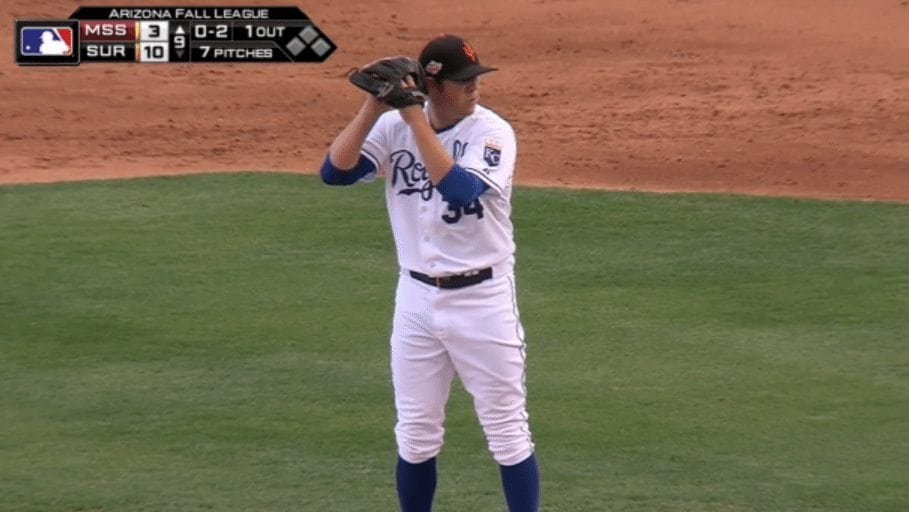 Right-hander Kevin McCarthy was a 16th round pick in 2013 of the KC Royals. I’m sure you are thinking “well, he’s been around” especially since he was drafted out of college (Marist). But he really has not.
McCarthy had a second knee surgery (the first coming at Marist), causing him to miss all but two games (four innings) in 2014. Thus, the 2015 season was his first full year of professional baseball.
“If I was told in the beginning of the year that I would finish in Double-A with a fall league invite,” McCarthy said, “I wouldn’t have believed it. But I just couldn’t be happier with how everything has worked out.”
McCarthy started the 2015 season with Low-A Lexington, but after posting dominant numbers (12IP, 10H, 3R, 2ER, BB, 8K) in six games with two saves, he was off to High-A Wilmington (where I had a chance to watch him pitch). He stayed with the Blue Rocks until the end of July, also posting dominant numbers (33IP, 24H, 7R, 6ER, 2HR, 5BB, 23K). Opponents hit just .205 against him and he was 4-for-5 in save opportunities.

Read the full article on: https://drinkingtheroyalsblueaid.wordpress.com/2015/11/17/mccarthys-whirlwind-season-culminates-in-afl/