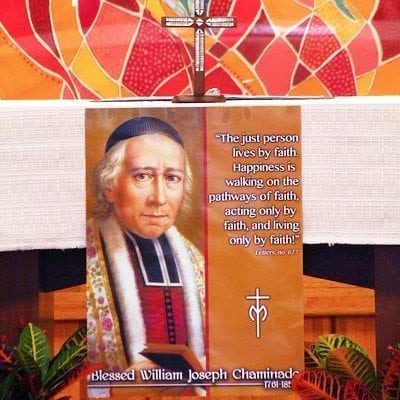 Clark Newby, Class of 2017
Blessed William Joseph Chaminade was a Catholic priest who was persecuted for his religious beliefs during the French Revolution. In 1797 he was exiled to Spain but remained true to his Catholic faith. While praying to Mary he received a vision to restore the Catholic faith in France. In 1817, Fr. Chaminade founded the Society of Mary, also known as the Marianist order.  Blessed Pope John Paul II beatified Fr. Chaminade on September 3, 2000. Today we still wait for his canonization in the Church.
On January 23, 2013, Kellenberg Memorial High School and the Brother Joseph C. Fox Latin School gathered to commemorate Blessed William Joseph Chaminade’s feast day, which occurs on Friday January 22, 2013. On the January 25, students are given a day off from classes in honor of the founder of the Society of Mary.
The Kellenberg Mass was celebrated in the cafeteria by Father Tom Cardone, S.M.. Teachers and Marianist Mentors helped distribute the Eucharist to the students during the Mass. Fr. Tom’s homily told us that we as Catholics should be like Father Chaminade. Father Chaminade was a man that always stood by his Faith. He was loyal to Mary, the Mother of God, even during times of persecution when his life was at risk. Mary was a perfect example on how to act and to live, by saying yes to God. As ordinary humans, we can look to Father Chaminade as an example. Father Chaminade always said “yes” to Mary and to God.
This Mass was very special to Kellenberg because it honors a great figure in the Catholic Church. The brothers and priests at Kellenberg belong to the Society of Mary so it is very proper to recognize and celebrate the Feast Day of Blessed Chaminade.
Through Blessed William Joseph Chaminade’s courage and dedication to the Catholic Church, we are now able to learn through the Marianist brothers and priests and follow his example of honoring Mary. The Mass celebrated to honor him brought the school together and made us one step closer to Mary and to God.

Marybeth O’Connell, Class of 2016
On Wednesday, January 23, the freshman class and some members of the sophomore class gathered in the gym to celebrate Mass.  This Mass was in honor of Blessed William Joseph Chaminade.  Father Todd Saccoccia, S.M. was the celebrant of the Mass.  As the congregation piled in, Mrs. Zider led her Jubilee Choir, along with the other students, in song.  The processional song was “Here I Am to Worship,” a favorite among the freshmen.
The Liturgy of the Word continued with a reading from a letter from St. Paul to the Galatians, read by Joseph Greco, ’16.  Father Todd read the gospel from Matthew.  This gospel told of when two blind men approached Jesus and, having total faith in Him, asked Him for healing. Jesus cured the men, saying, “Let it be done to you according to your faith.”  Jesus told the men to not tell anyone of the miracle, but the men made His power known.  Father Todd then gave a lively homily, engaging everyone.  He spoke of fear, and how controlling it can be.  He spoke of the fears of both Joseph Stalin and Vladimir Lennon, and how fear controlled their lives.  He even acted out a scenario in which he himself was afraid of public speaking, and was scared to come out to talk to us. He had everyone laughing as he acted terrified, even rolling on the floor!  He then spoke of those who overcame their fears, including Martin Luther King, Jr., and most importantly, Blessed Chaminade, the founder of the Marianist community.
Father Chaminade was a priest in a time when Catholicism was illegal in France, but that did not stop him from spreading the faith and helping to re-evangelize France after the revolution.  Fr. Todd spoke of how Father Chaminade had to go as far as hiding under the floorboards for days at a time to avoid discovery.  Blessed Chaminade was a truly brave man, who lived his life for Christ, and lived with the goal of bringing others to Him.

Michelle Manning, Class of 2014
On Wednesday, January 23, members of the Senior, Junior, and Sophomore class gathered in the auditorium after second period to celebrate Mass. The Mass was held in honor of Founder’s Day, where we celebrate Blessed William Joseph Chaminade, the founder of the Society of Mary. Father Albert Bertoni, S.M. celebrated the Mass. Members of the Junior class assisted him throughout the celebration by reading the Epistle and the Prayer of the Faithful. The Gregorian Consortium provided the music and all who attended joined in to praise God through song.
Father Albert gave a wonderful homily which displayed the similarities between our founder, Father Chaminade, and Martin Luther King Junior, whom we remembered on Monday. Both were influential in fighting for the rights of different groups of individuals.
Celebrating the sacrifice of the Mass as a school community is a unique and gratifying experience which all students enjoy and appreciate.