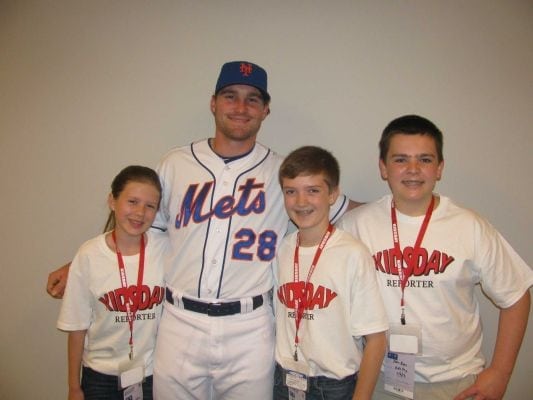 This past Sunday, Brother Joseph C. Fox Latin School students Madison Callinan, Matthew Echausse and John Ryan were featured in Newday’s Kidsday section. Earlier this year, the students were able to interview Mets’ infielder Daniel Murphy. Please visit the Kidsday website below to watch highlights from the interview, or click here to read the full transcript.
Here’s a preview:

For many people, a first at-bat can be a very tough thing, but on your first at-bat [in the major leagues] you got a hit off three-time All-Star Roy Oswalt. What did that feel like?
I don’t think I touched the ground on the way to first base. I was really nervous. I almost threw up in my first game. I was just sick to my stomach. Just because they were playing at the stadium that day, with that many people, and to get that first hit and kind of get it out of the way. . . . I would say it was sheer elation.
So far, what has been the high point of your baseball career?
I’d say just making it in the big leagues and then being able to get to know the guys in that clubhouse — a group of guys who worked together to kind of get to the level that you want to achieve and attain and . . . now [it] is such a good platform to kind of allow people to know what it is I stand for, which is the Lord. So the whole thing is kind of a culmination.