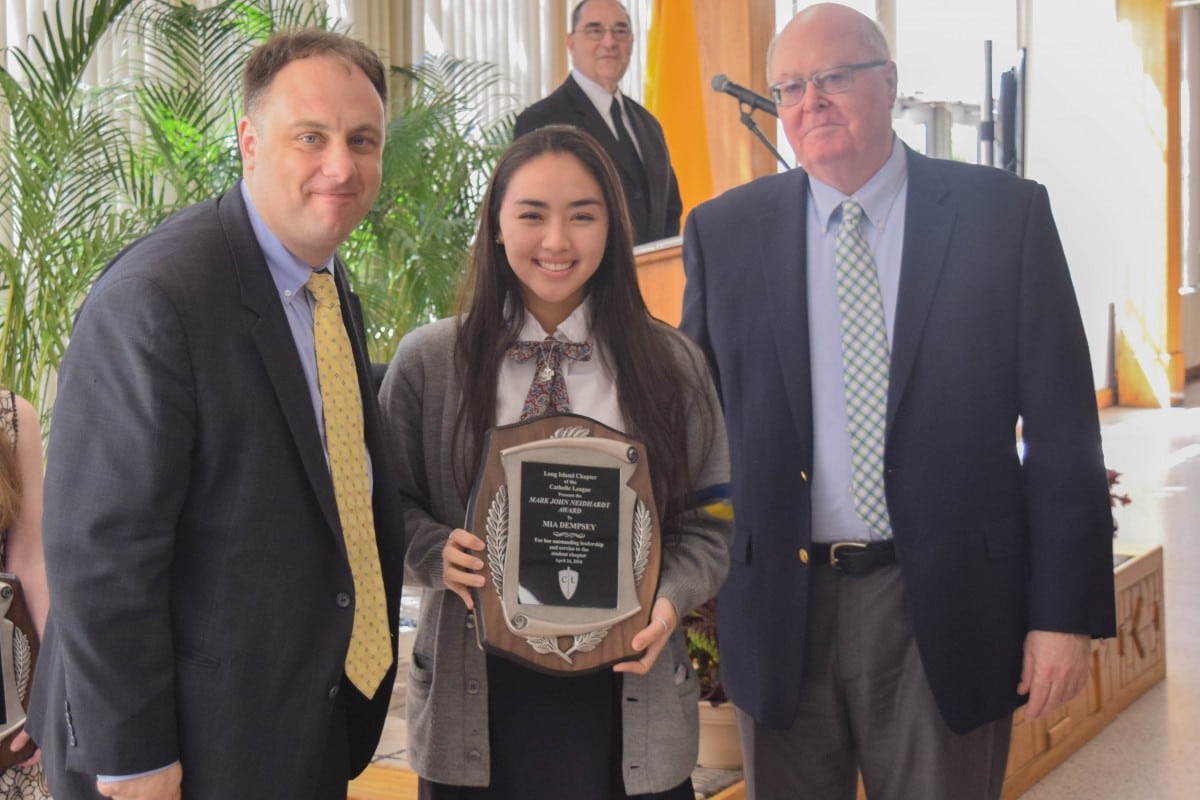 Article by Ismenia Ginebra ’18:
April 23 and 24 was a big weekend for the Catholic League at Kellenberg: it was the Catholic League Retreat on Saturday, which commenced with the 35th annual Catholic League Communion Breakfast.
The retreat began with a light breakfast upon arriving at the Emmanuel Retreat House, and soon after breakfast, the 25 of us boarded the buses to head out on our Pilgrimage to the Holy Doors at the Seminary of the Immaculate Conception in Huntington. As part of the world wide celebration of the Year of Mercy, Bishop William Murphy had established four Holy Doors in the as places of pilgrimage in the Diocese of Rockville Centre, one of these four being at the seminary. By making this pilgrimage, we had the opportunity to receive a plenary indulgence, fully benefiting during this Year of Mercy.
Upon arriving at the seminary, we first entered the chapel where we prayed the Rosary together. After prayer, we left the chapel to the Holy Doors. Walking through the Holy Doors, we sat in pews and spent more time in prayer. Once our time in the chapel commenced, we toured around the property and got to see more of the seminary and learning about the history as well.
When our time at the seminary was done, we piled back onto the buses and headed back to Kellenberg. After lunch, we then headed down to the cafeteria. It would be here where the Communion Breakfast is taking place, and along with the members of SALT, we helped set up for it.
The next day, we helped great the many guests as well as students from Chaminade, Sacred Heart, and St. Anthony’s representing their schools’ Catholic Leagues attending the Communion Breakfast. The morning began with Mass celebrated in the auditorium, with the choir from St. Anthony’s providing the music. After Mass, we headed to the cafeteria and enjoyed breakfast.
After everyone had been served, the program started. Mr. James Krug, moderator of the Catholic League at Kellenberg as well as the President of the Long Island Chapter of the Catholic League, started off with the announcement of the recipients of the Mark John Neidhardt Award. A student from each high school present was chosen to receive the award. Senior Mia Dempsey, president of Catholic League at Kellenberg Memorial High School, was chosen as recipient of this award.
After the award ceremony, Dr. William Donohue, President of the Catholic League, came up to present the Denis Dillon Award to the Little Sisters of the Poor for their courage and fight against the Supreme Court for the birth-control mandate of the Affordable Care Act.
Following Dr. Donohue, our special guest for the day, Raymond Arroyo, came up to speak. Raymond is an internationally known, award-winning journalist, producer, and New York Times Bestselling author as well as news director and lead anchor for EWTN. He first began speaking about the special relationship he had with the late Mother Angelica of the Annunciation. Mother Angelica is the founder of EWTN as well as television personality having had her own show. She touched the lives of millions of people. Her words helped many see the light when it was hard to. Mother Angelica and Raymond had a very special friendship, she serving as his mentor. He is the author of her biography Mother Angelica: The Remarkable Story of a Nun, Her Nerve, and a Network of Miracles.
Mr. Arroyo then spoke about his new upcoming book from his new book series called the Will Wilder Series. The first book is titled Will Wilder, The Relic of Perilous Falls. It tells the story of Will Wilder, a mischievous, headstrong twelve-year-old with an otherworldly gift—he alone can see the nefarious creatures encroaching on Perilous Falls.
Raymond spoke of the excitement he has for delving into children’s book as well as the vital importance of kids having an opportunity to read, for it provides them with many positive results in the future. Soon after Mr. Arroyo finished his talk, a closing from Father Philip Eichner, S.M., Chairman of the Catholic League, was given.