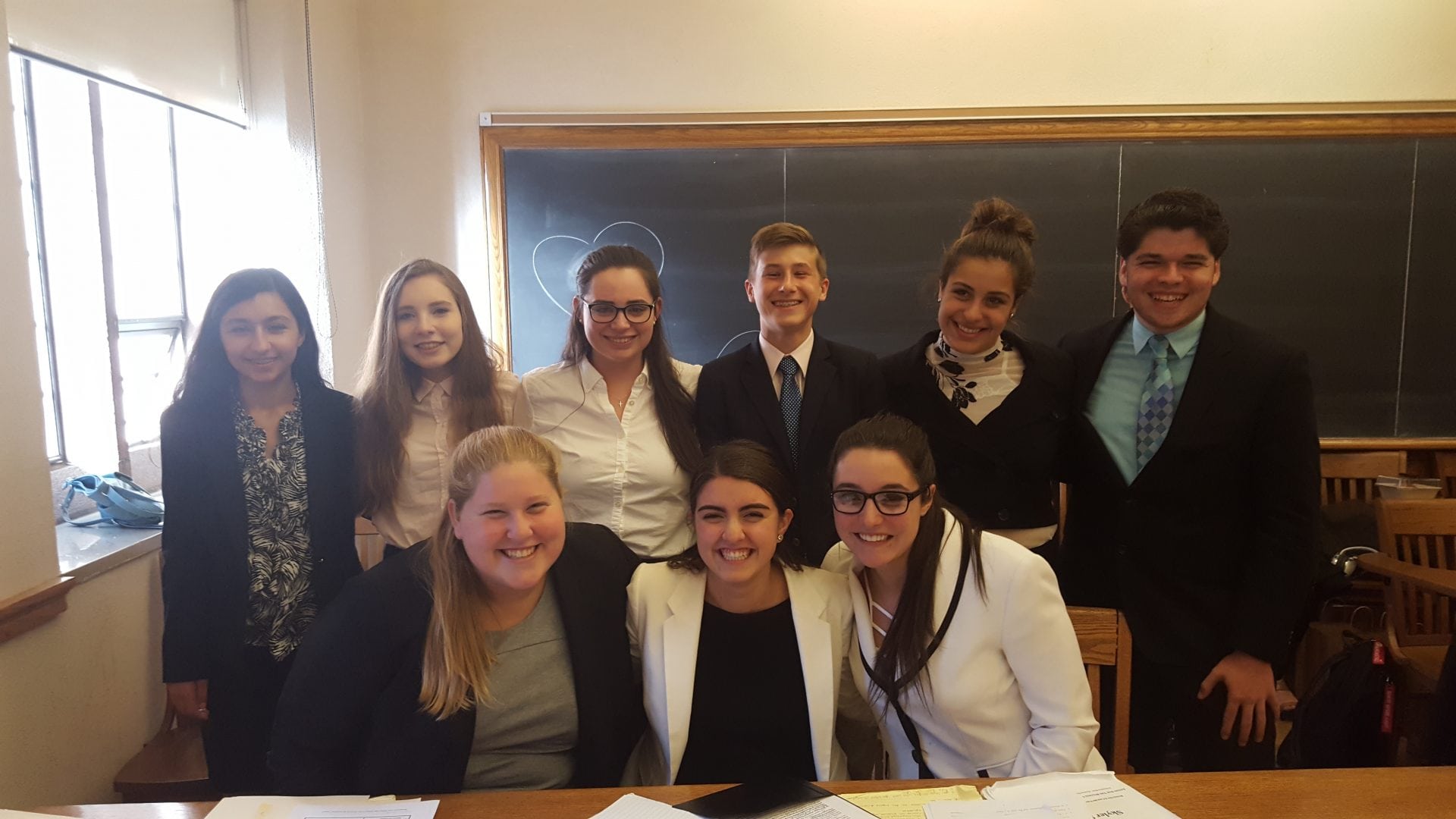 Article by Samantha Gentile ’18: Over the weekend the Kellenberg Mock Trial team traveled to the prestigious Yale University in New Haven, Connecticut to compete at the Yale Mock Trial Bulldog Invitational. The team arrived on the Yale campus Saturday morning face to face with twenty of the best high school mock trial teams from around the country. With a mix of nerves and excitement, the team was ready to endure the busy days of trials and workshops that were ahead of them.
In their first trial of the day, Kellenberg fought valiantly in a three hour match and emerged victorious with a unanimous win over their opponents. Attorneys Samantha Gentile, Katherine Cuneo, and Lauren Glupe led the defense with the help of witnesses Veronica Tadross, Ava Boneville, and Meaghan O’Keefe. This victory instilled confidence in the team, as they have never participated in a federal level competition and had to learn the new rules and regulations that go along with a case of this nature.
Immediately after the first trial, the team was thrown into another round. The prosecution team of attorneys Samantha Gentile, Katherine Cuneo and Lauren Glupe along with witnesses Kaitlin Byrnes, Nicholas LoPresti, and Colin Crowley again amazed in court. After their second trial, the team was able to attend workshops led by some of the students on the Yale Mock Trial Team. Whether it was a tour, how to create a cross examination, or how to develope a case theory, the team learned many new things that they intend to implement into their next competition. Junior Kat Cuneo stated, “it was such an amazing experience to be around so many different teams from so many different places! It was interesting to see how different mock trial is in certain states and how the competition was intense between everyone.”
The next day the team was again faced with back to back trials and again they amazed and astonished. Finally, after 2 days, 4 trials, and 12 hours of trial time the team was able to go to the closing ceremony. Over two hundred of the best high school mock trial students were sitting in a room awaiting the results. Kellenberg left the competition happy with their results and knowing that they were among the top ten teams. But they did not leave with just that; Senior Samantha Gentile was awarded with the Outstanding Attorney Award.
Lauren Glupe, a junior on the team stated, “Yale was a great as both a learning experience and for bringing us closer as a team.” The team is excited to apply their new knowledge at their next competition and continue grow closer throughout the year. We hope to see great things from the mock trial team and wish them well this school year!