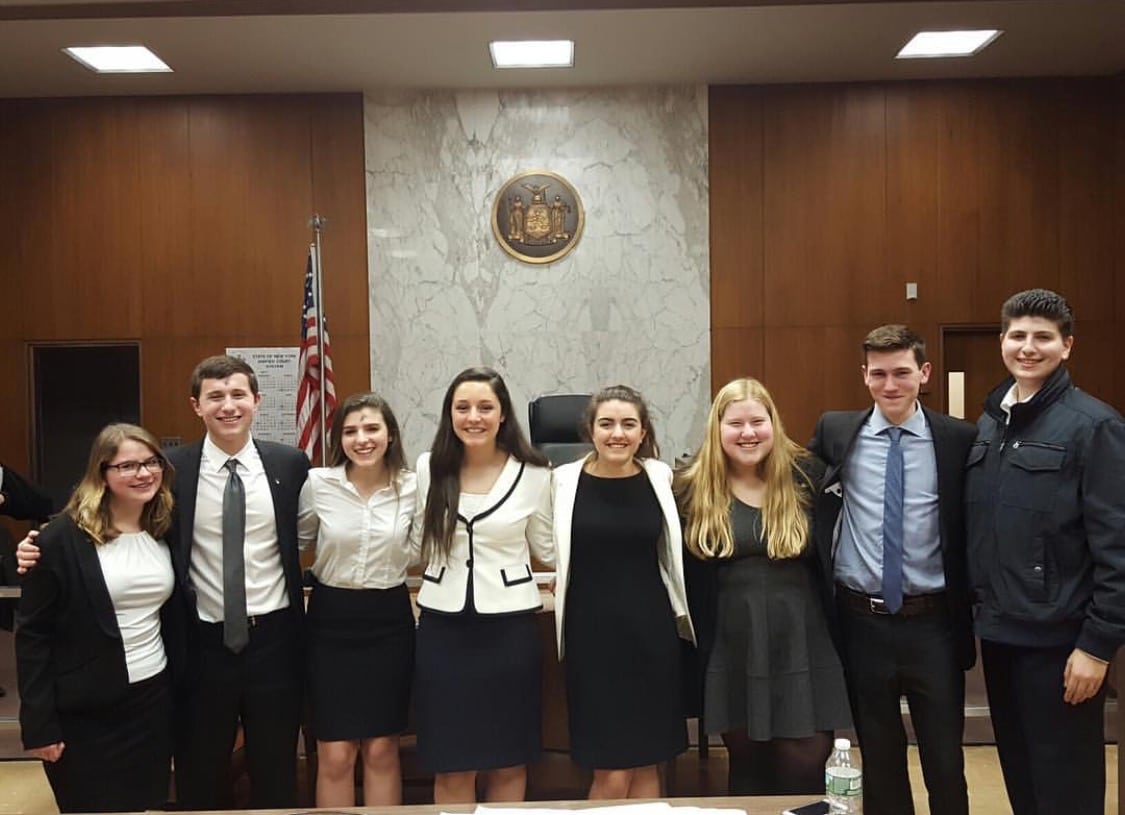 Article Written by Samantha Gentile ’18: The 2016-2017 school year has proven to be an amazing year for the Kellenberg Mock Trial team. The team started off the school year with a bang; as they placed in the final four in the first ever Moot Court Competition to be hosted for Nassau and Suffolk County teams. The Moot Court Competition was designed to test students knowledge of the law and how to apply their knowledge to different cases in front of real judges. As the students read their prepared scripts, the judges interjected, asking confusing and probing questions; judging as to how well the students know the law as well as their ability to stay on topic and maintain their courtroom presence. Christian Licato, a junior on the team, stated, “the Moot Court competition was a unique experience that gave the team insight to the realm of the appeals process. The competition was truly a memorable experience for both myself and my teammates.” The students prepared for weeks, and it showed. Never participating in a competition of the sort before and competing against the most competitive high schools in both counties, the team was proud of their accomplishment and ready to compete in their State Competition.
In November, the team received their case file for their annual New York State Bar Association High School Mock Trial Competition. The team immediately began to work on the case, staying after school for numerous days a week, and even coming in on weekends to speak to their attorney advisors. On January 20th, the team gave up their Friday afternoon and took a trip to see their friendly rivals, Our Lady of Mercy Academy. In a well-matched scrimmage, Kellenberg came out victorious and the amount of potential the team had became clear. Senior Co-Captain, Erik Hansen, stated, “The Our Lady of Mercy trial really instilled confidence in the team and proved that our team had everything we needed to make it farther in the competition than we ever have before.” As the days went by, the team increased the time they spent practicing at school. After their daily practices, they would even call from their homes to make sure their case was “up to par.” The team hoped their hard work would pay off when they faced their league rivals, Clarke High School, in their first trial. After a thrilling 3 hours, Kellenberg came out victorious. The team, excited about their victory, was determined to work even harder and continue their winning streak. Every Wednesday the team would travel to the New York State Supreme Court to compete against a new school from Nassau County. They were optimistic about their trials and walked in hoping to obtain another victory for their team and for their school. And they did. The team went on to win trials against Carey High School, Schreiber High School, and the Hebrew Academy of the Five Towns and Rockaway. After these victories, the team proceeded to the “Elite Eight.” This was a new milestone for Kellenberg; as Kellenberg has only advanced as far as the “Sweet Sixteens” in previous years.
The team walked into the “Elite Eight” round with a record of 4-0, yet another milestone for the Kellenberg team. They were, at this point, in the top eight teams, beating out over 60 other teams in Nassau County. The team was led by attorneys Gerard DeAngelis, Samantha Gentile, and Aria Marino. The team was also comprised of members Erik Hansen, Kat Cuneo, and Linda Flor who played the witnesses. During the case, the team displayed a valiant effort and most certainly were a force to be reckoned with. In the end, the judge ruled against Kellenberg but spoke with the team stating how incredibly close the decision was and how he had a hard time choosing a winner. Senior Co-Captain, Gerard DeAngelis, states “The time I’ve spent with this team has been the greatest experience of my life. They are like a second family to me.  I’m happy knowing we gave up a good fight this year and got to finally beat the ‘Sweet Sixteen’ round!”
The team has become closer than ever before and they all agree that they will miss the three seniors leaving them next year. Saying goodbye to these extraordinary seniors will be tough, but even with the goodbyes, junior Samantha Gentile believes that the team will come back next year better than ever. “This year, I saw our team live up to the name ‘Firebirds’, we rose from the ashes and showed other teams that Kellenberg is a team they should remember. I am going to miss the seniors more than they know, but I believe that next year, everyone should remember our name.”
The team would also like to thank their moderator, Mr. Christopher Cartier, for all the hard work and dedication he put into this team and for bringing them together. They would also like to thank their attorney advisors: Mr. Karl Seman, Mr. Christopher Casa, and Mrs. Lisa Casa for all their time that they contributed to helping the team. Without them, the team would not have made it as far as they had. We look forward to seeing great things from the Mock Trial Team and wish them the best of luck in their future competitions!