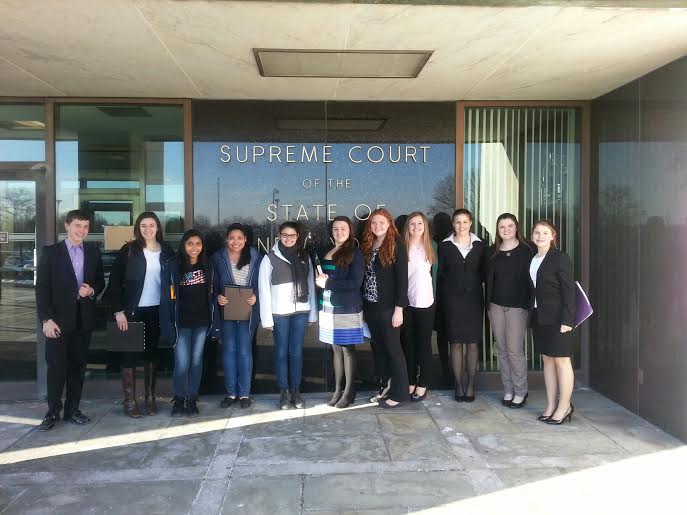 Article by Danielle Santevecchi, class of 2016:
This year, the Kellenberg Mock Trial team made school history by advancing farther than ever before in the New York State Mock Trial Competition this past February and March. The 2014 case involved hydraulic fracturing, a method of extracting natural gas from the ground. Practice for the competition began in December and over Christmas Break the team worked ambitiously to prepare their opening and closing statements, direct questions, and cross examinations. Mr. Cartier, the team’s coach, also worked vigorously to prepare the team for expected strong competition from powerhouse schools.
In January as the competition neared attorneys and witnesses further prepared by working with one another to support their team’s side of the case. Due to the scientific complexity of the case, it was necessary for each witness to prepare thoroughly by memorizing not only their affidavits but also key facts such as the components of benzene or the ‘purge and trap’ method, common in fracturing processes. At each competition, either the defense or prosecution competes from each school. The first competition occurred on February 5th with the prosecution representing Kellenberg and rivaling the defense team from North Shore Hebrew. The attorneys, juniors Annemarie Flannigan, Anne Marie Bernhardt, and attorney captain Cassidy Rafscal argued powerfully by bringing up crucial key points, protecting their witnesses, and breaking apart the other team’s witnesses. The other teams’ attorneys brought forth strong competition, but this did not intimidate the Kellenberg witnesses, Linda Flor, Gerard DeAngelis, and Nora Nugent.
Though the team fought hard to win, the judge announced at the conclusion of the case that North Sore Hebrew had won. However, the Mock Trial team bounced back on February 26th when the defense versed Freeport High School. Junior attorney Alyssa Belmonte, sophomore Danielle Santevecchi, and junior attorney captain Kim Henry dominated and easily overcame the attacks by the prosecution. Witnesses Tom Dompkowski, Natalie Henry, and Eric Hansen knew their affidavits word for word and did not let the opposing team conquer them.
The Kellenberg defense team won this competition, and also won the next against Friends Academy, a well known powerhouse school. This competition ensued on March 3rd, and was crucial to the mock trial team as it determined whether or not the team would advance to the sweet sixteen which had never before occurred in Kellenberg history. The defense did not disappoint and won by two points against Friends, an intense opponent. Now, Kellenberg was one of the final sixteen schools in the competition. The sweet sixteen occurred on March 12, and this time, the prosecution would compete. The teams were slightly altered and the new attorneys for this side were Kim Henry, Annemarie Bernhardt, and Danielle Santevecchi. Due to a last minute sickness by one witness, Natalie Henry had to take over as a prosecution team member the day of the competition. Natalie was amazingly able to memorize an entire affidavit in one day, something that was usually completed over weeks of practice time. The prosecution’s opponent, Hebrew Academy of Five Towns and Rockaway brought forth a hailstorm of competitive fire and though the Kellenberg team debated well, the Hebrew Academy emerged as the winner only by a few points. This ended a great season, marked by great improvement and advances never before made by the mock trial team. The team is greatly looking forward to next year, when they can improve even more and hopefully advance to finals.