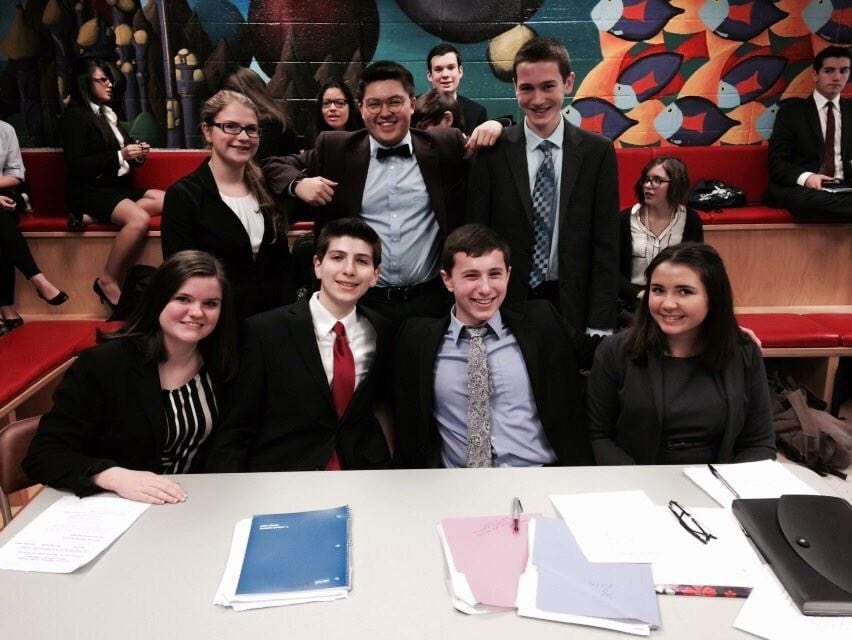 Article by Danielle Santavecchi, Class of 2016:
On Thursday, December 4th, the High School Mock Trial Team headed to The Wheatley School for the 32nd Annual SWS Mock Trial Tournament. The tournament included schools with mock trial teams from all over Nassau County. Kellenberg’s advancement to the sweet sixteen at the 2014 New York State Bar Association competition in February and March allowed them to participate in the Wheatley tournament.
The students left Kellenberg Memorial around 7:50 and made their way to Old Westbury with Mr. Cartier, the moderator of the mock trial team, and Mr. Cioffi, the moderator of the speech and debate club. The case being argued was a criminal case involving Terry O’Neal, a teenager who was being charged with second degree manslaughter for a car accident that resulted in the death of a teenage girl. Both of the rounds Kellenberg participated in were against one of the Wheatley School’s three mock trial teams.
The first round involved Kellenberg’s defense team, consisting of attorneys Gerard DeAngelis, Danielle Santevecchi, Nora Nugent, and Christian Licato. Also, the team included witnesses Erik Hansen, Tom Dompkowski, and Linda Flor, who all memorized full affidavits and painted vibrant pictures of their characters.
After a round of smooth direct questions, intense cross examinations, and powerful openings and closings, the judge delivered the results and Kellenberg’s mock trial team took in a win on their first round. Immediately after, the prosecution team followed, with attorneys Kim Henry, Natalie Henry, Michael Boyce, and Annemarie Bernhardt. Also making up the prosecution team were witnesses Micah Sanguyu, Veronica Valerakis, and Chris Merola.
The prosecution delivered another win, thus leading to a 2-0 victory for Kellenberg. “This competition really helped us sharpen our skills,” said Gerard DeAngelis, ’17. “I was opened up to a new world of mock trial experience and I can’t wait for the New York State competition.” The team hopes to advance further than ever before as a new season begins, and with the experience gained at the Wheatley tournament a new victory seems to shine in the Kellenberg Mock Trial team’s future.