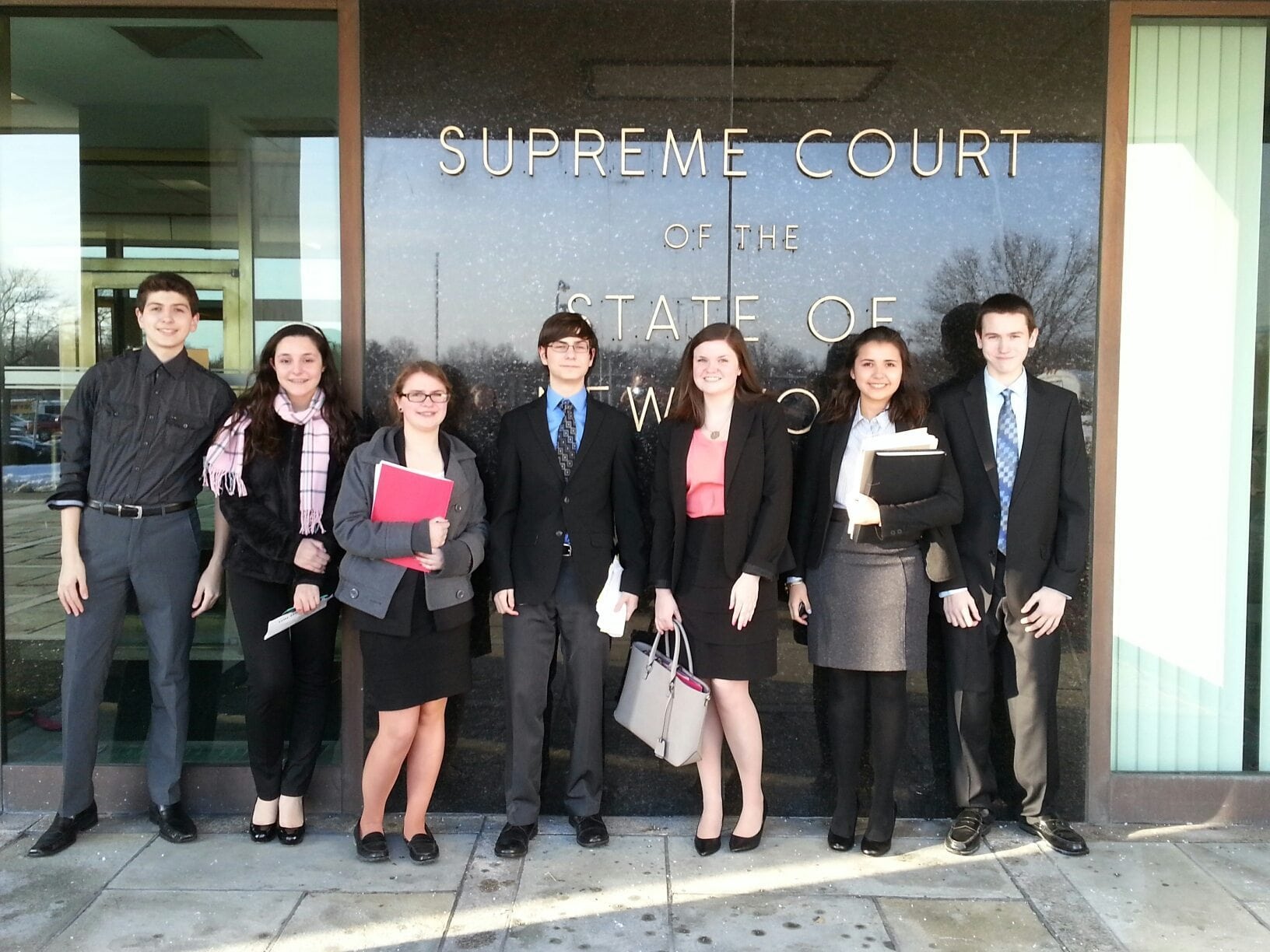 Article by Danielle Santevecchi, Class of 2016:
After months of preparation and hard work, the Kellenberg Mock Trial team has advanced enough in the Nassau County tournament to become one of the final sixteen teams of forty-eight to remain standing. After three weeks of competing with one trial a week, the team has emerged undefeated, therefore setting a new record in its history. This year’s fictional case involves the defendant, Casey Cheatham, facing a civil lawsuit from the Morningside Heights Booster Club, an organization in which Cheatham is treasurer. Formed in order to raise funds for children of the local school district, the committee brings civil action upon Casey for conversion, a legal term meaning to take another’s property for one’s own. After the club held a ‘Fun Fair’ to gain revenue, Cheatham was suspected of skimming profits to fuel a gambling addiction. The Kellenberg Mock Trial team, coached by Mr. Cartier, consists of two competing sides; defense and plaintiff. Both sides compete at the Mineola Supreme Court in Garden City inside real courtrooms.
On February 4th, 2015, the plaintiff competed against Oceanside High School.  The team prepared extensively by running through facts of the case, practicing opening and closing statements, and delivering their prewritten questions. Attorneys Nora Nugent ‘16, Danielle Santevecchi ‘16, and Linda Flor ‘17 kept their confidence throughout the course of the trial despite a bombardment of objections from the opposing defense team. Most impressively, the witnesses of the plaintiff team also managed to keep calm as opposing attorneys attempted to impeach and discredit their characters through cross examination. These witnesses include Chris Merola ’16 as Jesse James, Erik Hansen 17’ as Alex Aldrich, and Christian Lacata 18’ as Taylor Templeton. At the conclusion of the trial, Kellenberg prevailed, therefore starting off the competition season with an impressive win.
The following week on February 11th, it was the defense team who would now shine as they faced Syosset High School. Attorneys Kim Henry ’15, Natalie Henry ’15, and Gerard DeAngelis ’17 powered their way through the trial despite an unusual as well as tiny courtroom and an experienced judge with a unique and real world manner of handling court procedure. Witnesses Michael Boyce ’16 as Peyton Pearson, Caitlin Gaine ’16 as Whitney Williams, and Tom Dompkowski ’17 as Casey Cheatham held their ground as well and truly immersed themselves into the personality of their characters by memorizing pages of affidavits. Thanks to another win for Kellenberg at the conclusion of this trial, the team advanced to playoffs thus heightening both fear and determination as the competition grew stronger.
On February 25th, the defense team was randomly chosen to compete now against Jericho, a powerhouse school. Even so, the Mock Trial Defense team refused to relent and sealed in yet another victory for the Kellenberg Memorial Mock Trial team. Now, the plaintiff will compete against Wheatley High School on March 11th. If the team wins, they will become one of the final eight competitors, an accomplishment that has yet to occur in the team’s three-year history.  Whether aiming to pursue a career in law or not, it is clear those members of the plaintiff and defense are devoted to excelling as team, remembering that confidence is the ultimate key to success.