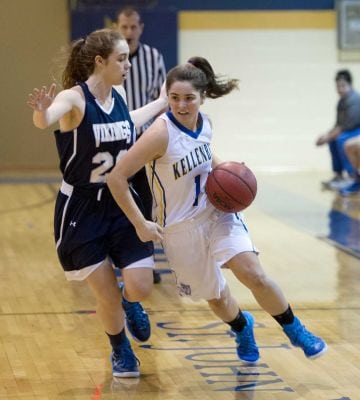 When a crucial inbounds pass was intercepted, landing in the hands of Kellenberg’s Lindsey Ehrhardt with six seconds left in Tuesday night’s State Catholic High School Basketball Tournament quarterfinals, there may have been some who were surprised. But not Ehrhardt. She knew exactly where it was going.
“I had an instinct,” Ehrhardt said. “I saw the ball going there and I knew I had to go to it to secure the win. I’ve had this instinct all season. It’s just sort of a natural thing that I have. I saw the passer’s eyes go over to her big and I went over to intercept it.”
Ehrhardt’s intuition propelled Kellenberg to a 47-46 win over St. Joseph Sea at St. John Villa Academy in Staten Island. The victory sends the squad to a semifinal matchup with Buffalo Cardinal O’Hara, scheduled for 7 p.m. Friday at Cardinal Spellman High School in the Bronx.

Read the full article on MSGVarsity.com: