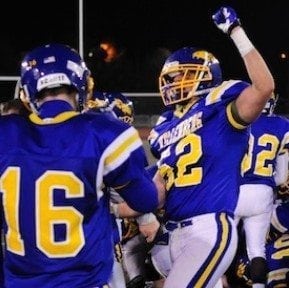 Andrew Roman’s junior season ended with a heartbreaking overtime loss in the CHSFL Class AA final to Fordham Prep.
He wasn’t about to let his senior season, and perhaps his football career, end in similar fashion.
“I might not play college football,” Roman said. “I just want to end the season with a bang.”
He ended Saturday night’s thrilling CHSFL Class AA quarterfinal with a bang, tackling Ramel Joseph on a botched extra point attempt to seal Kellenberg’s 42-41 overtime win over St. Francis Prep at Mitchel Athletic Complex.
“It was great,” Roman said. “I’m a senior and I didn’t want this to be my last game. I want to win a championship my senior year.”
The Firebirds are one step from again reaching the Class AA final and will take on the winner of Sunday’s quarterfinal between St. John the Baptist and Holy Trinity. Fordham Prep meets Xavier in the other semifinal on Thanksgiving morning.

The boys will will be playing in the CHSFL AA Division semi-final game against St. John the Baptist High School at the Merchant Marine Academy in Kings Point on Saturday November 24th at 1:00 pm. Come on out and show your support! Go Firebirds!