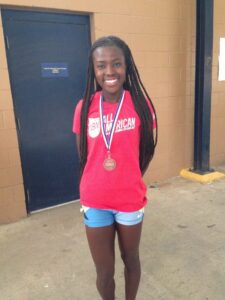 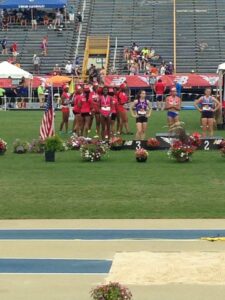 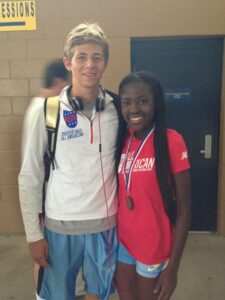 At this past weekend’s “New Balance National High School Track and Field Championships” held in Grensboro, North Carolina, Kellenberg had five student-athletes run to the top six “All-American” designation, and four additional Firebirds finish just shy of that prestigious claim.
The Duke bound Murphy anchored the team of James Malabranche, Randall Turner, James McQuade, to the runnerup spot, just short of the winning team from Ohio’s finish. The team set a new school record of 7:41.9. Murphy was sensational in his anchor, running 1:49.56 for the 800 meter leg. This is the first time in 44 years that a Long Island high school runner has broken the coveted 1:50 mark for 800 meters. The last was Massepequa’s Brian McElroy in 1969 who later led Villanova University to many IC4A and NCAA titles. Not even Mepham High School’s legendary halfmiler from the seventies, Mark Belger, went under the 1:50 mark in high school! Belger remains the only track and field athlete to win ten(!) gold watches at the Penn Relays during his collegiate career at Villanova. Many Long Island track and field “aficinandos” feel Murphy’s performance stands as the the best New York track performance of the year!
The elegant sophomore Jazmine Fray ran to a fifth place finish in the 800 meters, in a race with eight State Champions, capping off a tremendous sophomore year for the student-athlete from Freeport. Her teammates Melany Belot, Danielle Correia, both juniors, combined with seniors Dorie Ervilus, and Mary Camarano to finish an outstanding seventh in the Shuttle Hurdle Relay.