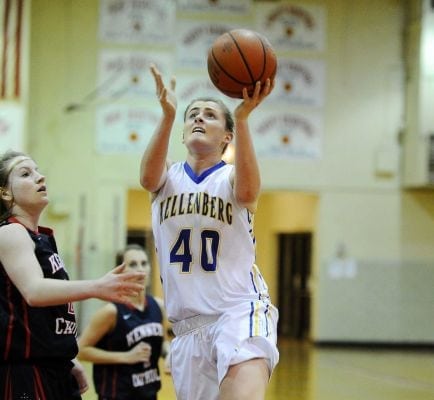 First-quarter jitters would have made sense for the Kellenberg girls basketball team. This was unfamiliar territory. The Firebirds, making their first CHSAA state semifinal appearance since 2009, took a few minutes to get going, but once they did, there was no stopping them.
Kellenberg topped Kennedy Catholic, 46-39, Friday night at St. John’s Prep in Astoria and will face Buffalo Cardinal O’Hara in the CHSAA Class A state title game at 5 p.m. Saturday at Holy Trinity. Candace Belvedere (14 points) led the Firebirds.
Kaitlyn Stackpole’s three-pointer broke a scoreless tie with just under five minutes left in the first quarter.
“Our offense was stagnant,” Stackpole, who finished with 12 points, said. “We knew we needed to move around, pass the ball, and cut like we usually do…