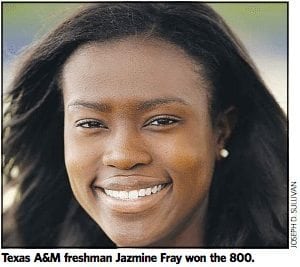 Though the event was in Westwood, California, there were quite a few interested Long Islanders on Saturday when Texas A&M and UCLA ran against each other in a battle of top-10 women’s teams.
Former Kellenberg runners Kim Mackay of UCLA and Jazmine Fray of Texas A&M competed against each other in the 800 meters, providing a local flavor to the meet in Southern California.
Fray won the race in 2:05.72 and Mackay took third (2:10.0).
“It’s funny how me and Jazmine are both from Long Island and meeting down in California. It’s a weird coincidence,” said Mackay, a Seaford product who graduated from Kellenberg in 2011. Mackay spent four years at Princeton, redshirting in one of them, and is pursuing a graduate degree in social welfare at UCLA.

Click here to read the full article on Newsday.com:
http://www.newsday.com/sports/college/kellenberg-alumni-duel-jazmine-fray-tops-kim-mackay-1.11699988