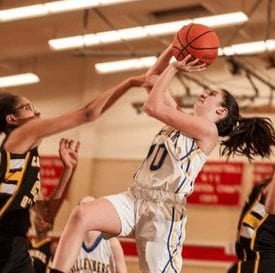 Playing for a shot at the state CHSAA Class A championship should have been motivation enough, but the Kellenberg girls basketball team had a score to settle with Buffalo’s Cardinal O’Hara.
And now they’re even. The Firebirds beat O’Hara, 60-49, Friday to advance to the 5 p.m. title game against Nazareth Saturday at [Archbishop Molloy High School in Queens].
“This is huge for us because they beat us [62-59] in the state championship game last year,” said senior Lindsey Ehrhardt, who scored 15 points with 11 rebounds for Kellenberg (19-0) in Friday night’s game.
Nazareth (8-19) reached the final with a 65-50 victory over Spellman.
“I’m so excited,” said Kellenberg junior Katherine Calabro, who had 10 assists and five steals. “I have a strong feeling that we can get to Federation.”