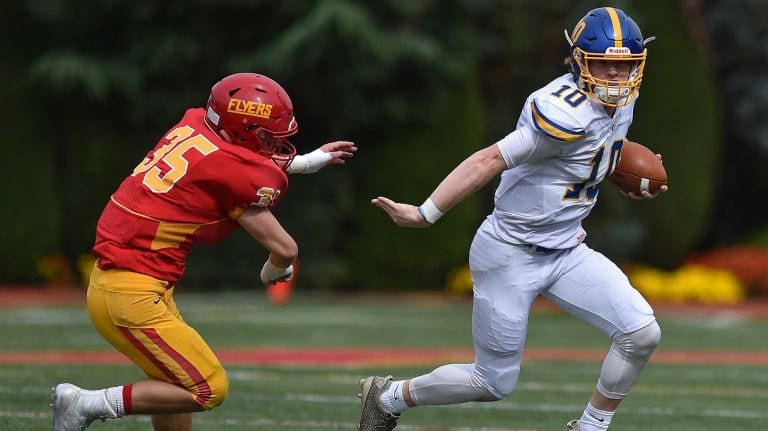 By Newsday’s Roger Rubin:
When this season’s CHSFL schedule was revealed, the players from Chaminade and Kellenberg all circled October 14. The meeting meant nothing to either’s title hopes — because they play in different classes — but it meant everything for area bragging rights.
“This is the chance to beat the kid who lives two doors down from you and nothing’s better than that,” Kellenberg quarterback Matt Sluka explained. Added running back Jordan Delucia: “[They are] our friends and neighbors — it’s a game we’re going to talk about all our lives.”
Sluka, Delucia and the rest of their Firebirds teammates will be dominating those conversations in that case. In a game marked by passionate play from both teams, Kellenberg was the dominant force in a 42-14 triumph before a near capacity crowd at the Flyers’ Gold Star Stadium.
Read the rest at Newsday.com: https://www.newsday.com/sports/high-school/football/kellenberg-chaminade-football-1.21951335?utm_source=tw_sp
Categories: Athletics, Kellenberg FeaturesOctober 14, 2018
Tags: AthleticsBlue and GoldFirebirdsfootballNYCHSFLUndefeatedVarsity
Share this post
Share on FacebookShare on Facebook TweetShare on Twitter Pin itShare on Pinterest Share on LinkedInShare on LinkedIn