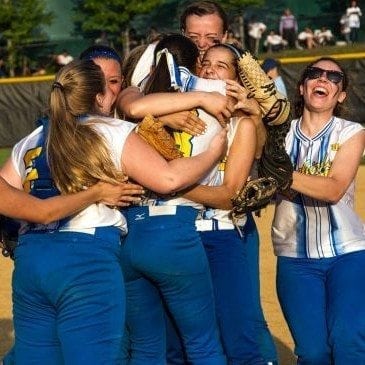 Raise your hand if you think this year’s state title was sweeter than last year’s.
The poll results were unanimous. In unison, the members of the Kellenberg softball team raised their arms into the air. That included the most important arm of all, that of Sabrina DeAngelis, who pitched both ends of a doubleheader Wednesday.
She threw a no-hitter in the CHSAA state semifinal, then in the championship game, didn’t allow a hit until the fifth inning to lead Kellenberg to an 8-2 win over Fontbonne as the Firebirds captured their second consecutive state title.
So, last year’s state title may have been the program’s first, but yesterday’s was the sweetest.
“The second one is much better,” said DeAngelis, who allowed two runs, five hits and three walks with five strikeouts. “We couldn’t be perfect like last year and we fought so hard to get here. I couldn’t have asked for a better ending.”