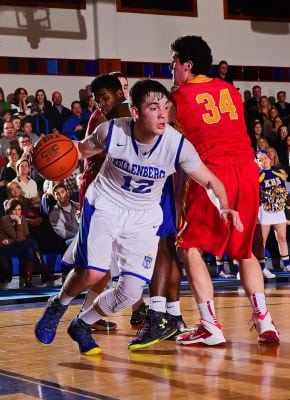 In the final quarter of the final home game of their stellar varsity careers, Kellenberg guards Steve Torre and Kyle DeVerna applied a brilliant finishing touch.
Torre scored 13 of his 28 points and DeVerna added eight of his 30 to lead the Firebirds to an 85-71 victory over Chaminade on Friday night in a key Nassau-Suffolk CHSAA game before a roaring, overflow crowd in Uniondale. The teams are tied for first at 8-2 with two games left before the playoffs.
“These are the two best guards to ever play for Kellenberg,” coach Jack McCutcheon said, “and it’s very special for me to have coached them for three years.”