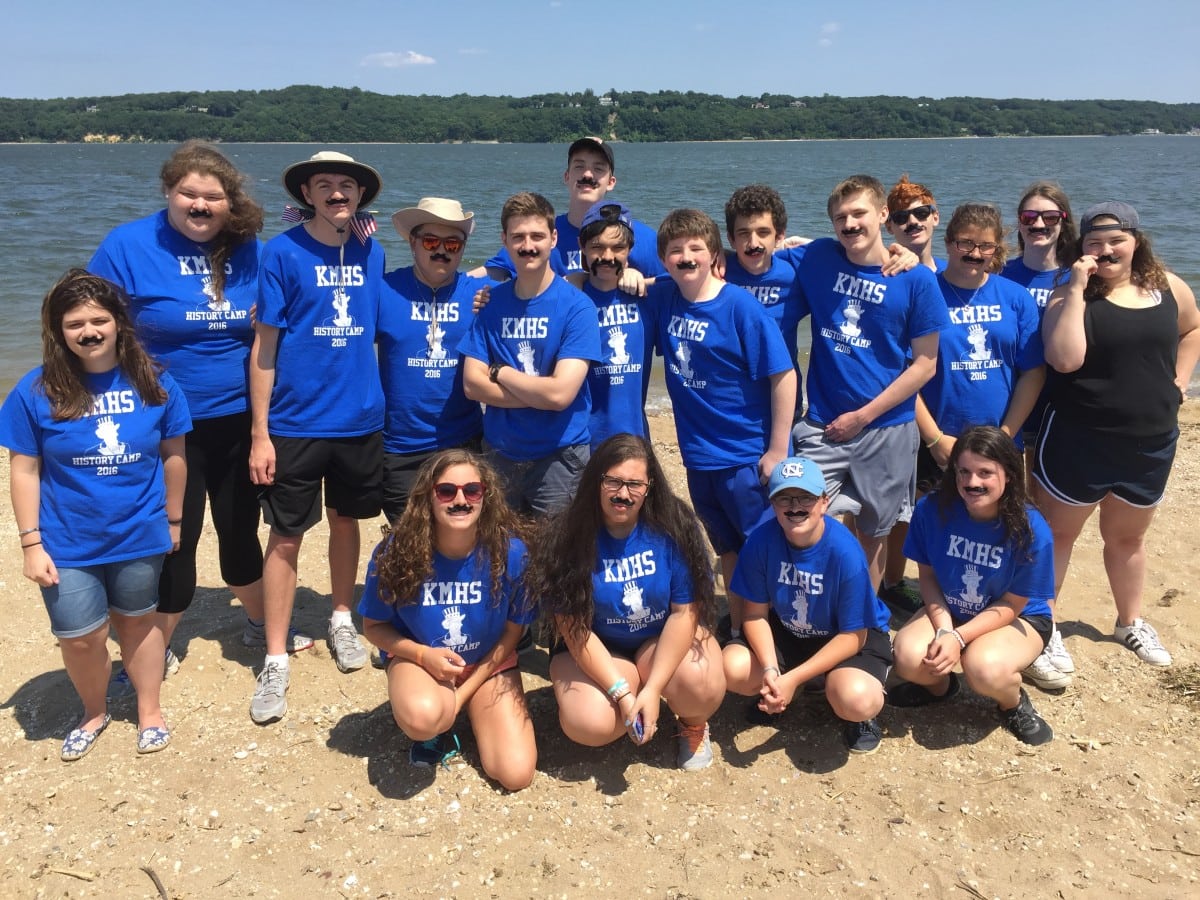 Article by Marissa Cubillos (’17); This year was Kellenberg’s First Annual History Camp! Throughout a five day period, we would travel to different places in New York and learn about the history of certain people or certain places that have great significance.
On the first day, we visited St. Paul’s Historic Church in Mt. Vernon. It was very interesting because you learned about how the doctors took care of their wounded patients, and some of the crude methods of how they did that. We walked around their beautiful cemetery where our tour guide showed us why certain grave stones were engraved the way they were and what time period they were based on the way they were engraved. We also were able to sit inside the church where they have the oldest working organ from colonial times that still continues to play. Our tour guide played a piece for us that amazed everybody. After, we traveled to the Walkway across the Hudson in Poughkeepsie. From the start to the finish of the walkway, it was 1.28 miles. It was a great way to get some exercise and enjoy the beautiful view of the Hudson River. After, we traveled to Founder’s Holllow. There, we were assigned our room assignments and then we met back up again for dinner. Dinner didn’t just happen. Everybody worked as a team. After dinner we had a camp fire and made smores. It was a nice way to finish off the wonderful day we had.
On the second day, we visited Saratoga National Park. We watched a short film about the military strategy of the British and the colonies. Our park ranger even let some of us try on different types of colonial uniforms and everyday clothes. The group was then given a colonial musket demostration. It was very loud so we had to cover our ears when he fired! Mr. Buckley and his wife came and surprised us. It was very nice having them there. Afterwards, we drove to different battle sites and a farm around the park. We even visited the monument dedicated to Benedict Arnold’s leg.  It was so beautiful between the sky and all the grass and trees. After, we returned back to Founder’s Hollow and ate dinner. It was Ms. Frisina’s birthday on Sunday, so we decided to have a cake for her and a fellow camper whose birthday happened to be that day.
On Wednesday, we visited Franklin Delano Roosevelt’s house in Hyde Park. We watched a film on his family and how his wife and he both helped the United States throughout the years of the Great Depression. We took a walk to his resting place, where he and his two dogs were buried. We then went to his house. It was very beautiful and big, full of history and memories. The first time that a European Monarch stepped foot on U.S. soil was at his house. The King and Queen of England visited his house. He had an elevator that he used to get upstairs, but it wasn’t electrical because he was afraid of fire. He had two ropes on it that he would use to pull himself up. We visited the presidential library where millions of documents are stored. You could actually sit down and scroll through some of them at different stations. We finally started making our way back to Kellenberg but before we did, we stopped at Dairy Queen for lunch. You can imagine the look on the cashier’s face when she saw thirty five of us getting off the bus and making our way towards the line.
On Thursday, we went to the Old Bethpage Village Restoration. It was really cool and you felt as if you were actually part of the colonial history. We learned how to knit things using fur from sheep. We also got to see a bunch of animals, including the famous 900 pound pig. We visited the school, and got to sit in the desks. There was a Church. There was a hat shop and a blacksmith shop, where they would make horseshoes and other items. We went to the mercantile shop, and learned about how they did business there. After a day of exploring the village, we got to play colonial baseball which was really cool and a nice way to end the day.
Our last day together, Friday, we went to Teddy Roosevelt’s home at Sagamore Hill in Oyster Bay. His house was very cool. There was lots of dead animals inside, because he loves to hunt. He has lots of bedrooms. He has a really cool staircase with red carpeting. His house is very dark. It has lots of dark brown wood. Afterwards, we went to the museum which had a lot of information about his life. His museum is actually his son’s old house. His son never returned from WW2 because he was wounded and died. His wife continued to live in this house until the government took over the home. We took a nature trail which was about 0.7 miles long. It was very down hill going down, and uphill coming back. The nature trail lead to the beach, which overlooked Oyster Bay. The view was so beautiful and jaw dropping. We skipped rocks there and enjoyed the beach. There, we received mustaches to look like Teddy Roosevelt. Our last stop of camp was the cemetery which held the grave of Teddy Roosevelt. His grave is surrounded by black metal gates. His gravestone is big and beautiful. It has American flags inside.
This was the first history camp and it was the best camp I’ve ever been to. We had such an amazing time and we learned a lot. Luckily for us, it was beautiful everyday. Mr. Cioffi and Mr.Bursig did a great job putting this together. I will never forget the amazing time and memories I had here!