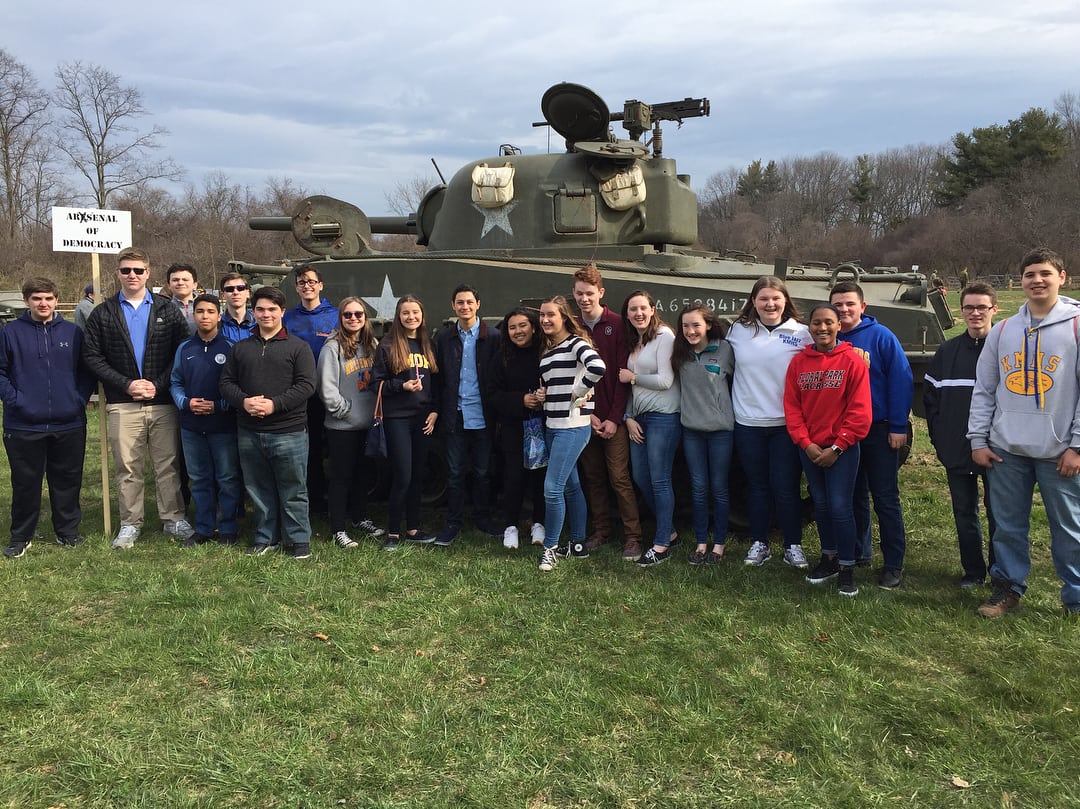 Article by Sean Ronan ’20:
On Friday, April 13, 2018, 20 students from the class of 2020, as well as a plethora of students from nine other school districts from all over the island, had the opportunity to spend the day at Old Bethpage Village Restoration to learn about life during World War II and the Holocaust and view a reenactment of the war. 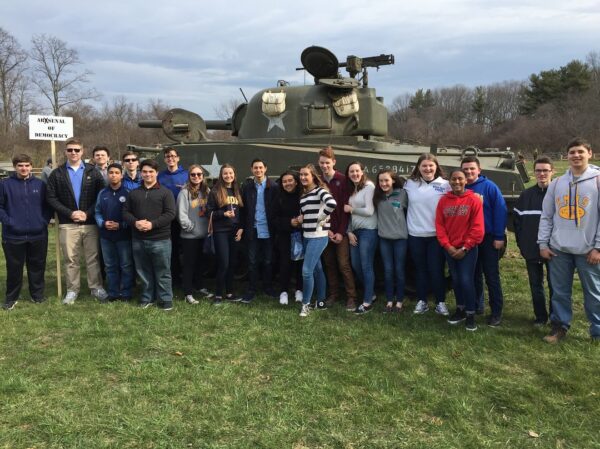 During the trip, Kellenberg students were paired up with students of Kings Park High School. The program was divided into different stations where students would spend about ten minutes listening to a reenactor dressed in a typical camouflage combat uniform speak about different aspects of the war. A bugle sounded at the end of each session, which let everyone know to move on to the next station.
At the first station, reenactors Dave Gotard and Paul Mauyani taught students about the different types of weaponry that were used during battles, such as hand grenades and artillery shells.
Steve Demeo, Al Barto, and Paul Randazzo informed everyone about the tanks that were used. Students even got to see them in action. Mr. Demeo, the designated Sherman tank driver, commented, “My experience allows me to better understand what some 19 year old would have witnessed in 1944. It is a very intense time machine.”

At the third station, Laurie Bear, dressed like Rosie the Riveter, spoke about Rosie’s campaign that inspired many women back then to work for defense industries during the war saying, “Tens of thousands of women entered the workplace during World War as they became crucial to war production. Once that barrier came down women refused to simply go back to the kitchen and society changed forever.” She even spoke about the Grumman Aircraft Engineering Corporation located in Bethpage, New York which produced military aircraft during the war. Ms. Bear further commented, “Being able to teach the students about women’s roles during the war and how a lot of the war effort fell on their shoulders was something that I really wanted to talk about. There’s always a lot of information to be found about the G.I.’s but the women really did a lot to continue the production back at home. From Grumman to Republic and machine shops in between the women really did more than their share to help out the guys overseas. If it wasn’t for the ladies who knows how the war may have turned out!”

Students then got to learn about the food that was made back then by military cooks. One reenactor, Joe Napoli, dressed as a chef, told students that soldiers back then were only allowed an 800-calorie diet to energize them for the day. He continued to say, “You may think wars are won with bullets and bombs but without adequate food and nutrition that fighting force becomes empty. America’s farms and commercial kitchens figured how to feed millions of Americans around the world and that was one more winning edge we enjoyed during that conflict.” As the speaker was talking to students, chefs Charlie Luceno and Pete Bugala prepared a small meal made of beef immersed in a creamy sauce, all on top of a piece of toasted bread. The students were even allowed to try some of it. Many seemed to have enjoyed it based on the expressions on their faces. The speaker further informed students on the advancements in food that were made during the war, such as the invention of M&Ms and the use of salt to prevent foods from becoming dehydrated.
At the fifth station, students learned about the type of medical care that was available during battle if there were any injured soldiers. Speakers Jeff Rein and Stacy Wasson, dressed as medics, showed students an old ration book used by families during the war for students to look at. 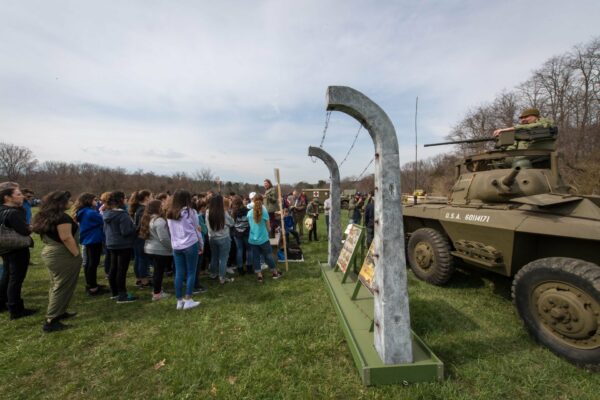 The liberation of the Nazi death camps were demonstrated at the Museum of American Armor to hundreds of school children.

Then, the director of youth education from the Holocaust Memorial and Tolerance Center of Nassau County, Helen Turner, spoke to students about the Holocaust, a planned genocide against the Jews by Adolf Hitler during the world war.
At the final station, everyone got to participate in a drill and ceremonies tactical training by responding with certain movements to supervisor and drill sergeant Tim Van Wickler, who would shout different commands at the students. Mr. Wickler spoke about his goal as a supervisor at the Old Bethpage Village Restoration and partaking in the reenactment: “It’s important for students to learn about their history. It is good, and important to learn about things through textbooks, but what we do here is bring history to life. We try to make it more relatable and more visual for the public. Our goal is to help people understand the past but by demonstrating it in a different light than they may have been taught initially. For my particular station I drew on my own Basic Combat Training experiences at Fort Jackson, SC. From there, I conducted research as to how the training and even some commands differed from 75 years ago and today. I wanted to be able to not just tell the students and adults about the techniques and commands, but put the students right in it, as if they were there. By doing this, I hope that the students took away a different feeling and tone by participating in the training rather than simply witnessing it.”

Nicholas Motta, who attended the trip, described his experience saying, “The trip allowed me to better understand the horrors of the Second World War — the war that shaped the modern world. I learned about different types of propaganda, as well as the fighting spirit of America. I am so very grateful that I had the opportunity to partake in this event.”
Categories: Activities, Kellenberg FeaturesMay 2, 2018
Tags: Activitieshistory club
Share this post
Share on FacebookShare on Facebook TweetShare on Twitter Pin itShare on Pinterest Share on LinkedInShare on LinkedIn