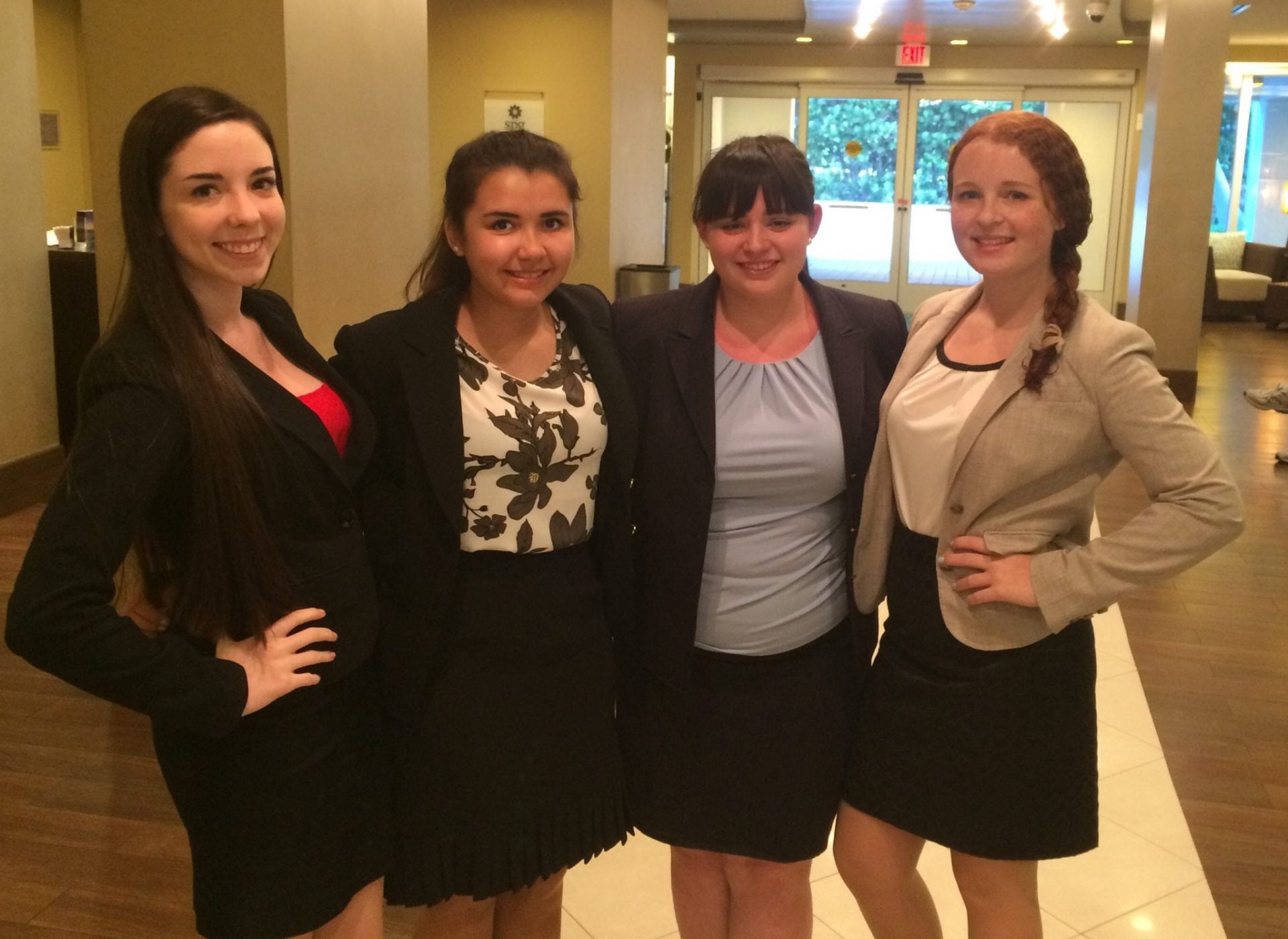 Article by Danielle Santevecchi (Class of 2016): Memorial Day weekend is typically a time of barbeques, beaches, and sunshine, but for the Speech and Debate team’s national qualifiers, performing becomes another one of the day’s plans. The Catholic Forensic League hosts their national tournament annually throughout Memorial Day weekend in varying locations, including Washington DC, Sacramento, and Milwaukee. On Thursday, May 21st, the long-awaited trip to Fort Lauderdale for this year’s Speech and Debate Nationals began with a 9:35 AM flight at La Guardia Airport. The qualifiers were able to attend due to the fact that they placed from first to sixth place at the qualifier tournament in March. The entire Long Island league travelled together on the plane, including both Kellenberg and Chaminade. Speech and Debate moderators Mr. Cioffi and Ms. Frisina accompanied qualifying juniors Fiona Danyko, Maegan Cross, and Danielle Santevecchi, along with qualifying Freshman Kate Byrnes.
The hotel accommodations and trip plans were coordinated and planned by Brother John McGrory of Chaminade. Speech and Debaters of Long Island stayed at the Westin Beach Resort in Fort Lauderdale, a beautiful hotel overlooking the ocean, giving the students ample time to relax before a hectic day of competing. This free time also allowed some to meet other Speech and Debaters from New York or practice pieces.
On Saturday, the team headed to Nova Southeastern University by bus, where different Speech categories competed across the campus. On that day, four rounds occurred for both Oral Interpretation and Drama, the two areas that Kellenberg qualifiers participated in. The Oral Interpretation rounds began at 9:30 AM and continued throughout the day at 11:15 AM, 2:00 PM, and 3:45 PM. The Drama rounds occurred at the same times, with the exception of round two, which began at 12:30 PM. For both categories, about seven people spoke in front of three judges. In Oral Interpretation, performers recite and act out 10 minute prose and poetry pieces from a binder, and in Drama, performers memorize a 10 minute monologue that must be brought to life in front of the audience. Qualifiers spent months preparing for nationals in hopes that they would break to finals or improve scores.
On Saturday night, the long-awaited NCFL Posting Party occurred. At this event, almost every qualifier from around the nation gathers for a fun-filled night with a DJ and snacks such as popcorn and ice cream. Eventually, the code numbers of competitors who made it to Sunday’s finals would be posted. Kellenberg and Chaminade travelled together by bus and the results were posted at about 10:30 PM. The next day, the Kellenberg qualifiers were able to spend their final day at the hotel and pool, remembering a truly unforgettable weekend that provided many learning experiences and memories. The award ceremony occurred at about 8:00 PM on Sunday night, and on Monday morning the entire league left Fort Lauderdale on a 7:30 AM flight, waving goodbye to Speech and Debate until next season. The 2016 NCFL Tournament will occur in Sacramento, California, and the Kellenberg Speech and Debate team hopes to qualify even more students to compete. Overall, the weekend was a great success, and each student was able to bond with each other and improve greatly on their speaking skills.