Speech And Debate Team Fights for a State Title 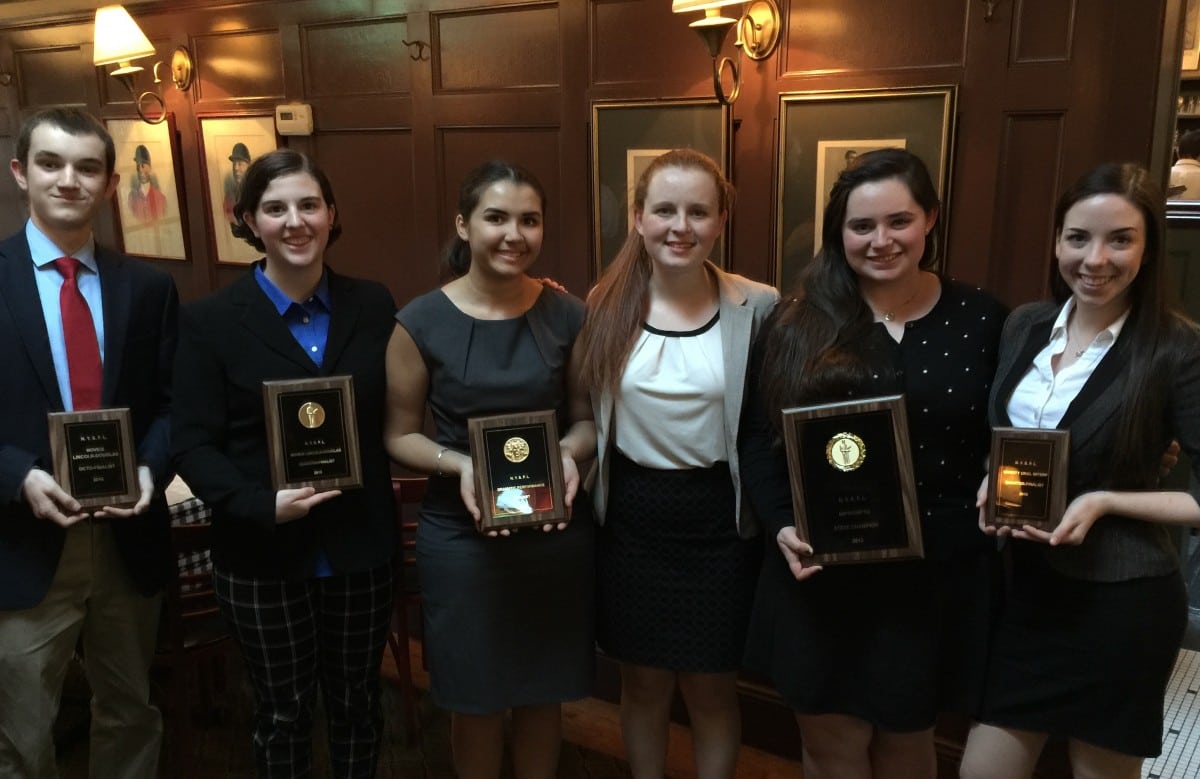 Article by Artemis Tsagaris (’16) and Alex Vigliotti (’17): On the rainy Saturday morning of April 9th, the Kellenberg Speech and Debate team traveled to Hofstra University to compete in the annual New York Forensics State Tournament. After weeks of practicing, the Speech and Debate Team was ready to do the best they could in their respective categories. The tournament was made up of five, long, grueling rounds of competition that spanned nearly twelve hours.
Eagerly awaiting the start of the competition, the team members strenuously practiced their monologues and arguments hoping to earn a state title. Finally, the competition rooms were posted and the tournament every member had been waiting for commenced.
Throughout the day, the team either continuously battled over world issues or passionately expressed their emotions through a story, never allowing their assurance to slip from their grip. Fighting with strength and dignity, the Firebirds exerted all the practice they accomplished into their pieces, giving their absolute best effort. After five extremely fierce and zealous rounds, the speech and debate team relaxed with confidence and instantly began to bond as a real group. Chatting excitedly about their intense day, the other team members listened and related to their own exotic experiences, tying the team into a tighter knot. To finish the night, the group attended a beautiful mass led by Father Tom at the University.
At the end of the day, the league released the names of the competitors that made final rounds, which would take place the next day, April 10th.  Kellenberg had an amazing showing at finals.  In Debate, Kieran Dennis (’18) and Catherine Dotzier (’19) had advanced, and in Speech, Maegan Cross (’16), Fiona Danyko (’16), and Danielle Santevecchi (’16) made finals.
Sunday came quickly, finals started, and Kellenberg competitors vigorously competed for new state titles. Other students who did not qualify for break rounds on Sunday decided to participate in an special category called Impromptu.
After the intense day, the Firebirds gathered in the gym for the long-awaited awards ceremony. Kellenberg immediately started sweeping titles with Kieran Dennis winning sixteenth place in Novice Debate and quarterfinalist Catherine Dotzler placing in the top eight in Lincoln-Douglas Debate. Overall the Debate Team finished in tenth place out of a total of forty three teams. The speech awards for Varsity Oral Interpretation were announced soon after, placing Maegan Cross in the top sixteen and Fiona Danyko in seventh place overall. Senior Danielle Santevecchi won fifth place overall in Drama after days of continuous practice and perfecting. In Impromptu, sophomore Paige Perrone took seventh place and Kate Byrnes won first place, sweeping the state title for Impromptu and highlighting the whole tournament.
The determination the team showed throughout the tournament and season never failed to drive each member to do his or her absolute best. With the great showing the speech and debate team achieved this year and the member’s continual optimism for what they do, the Firebirds achieved the success they fought for.