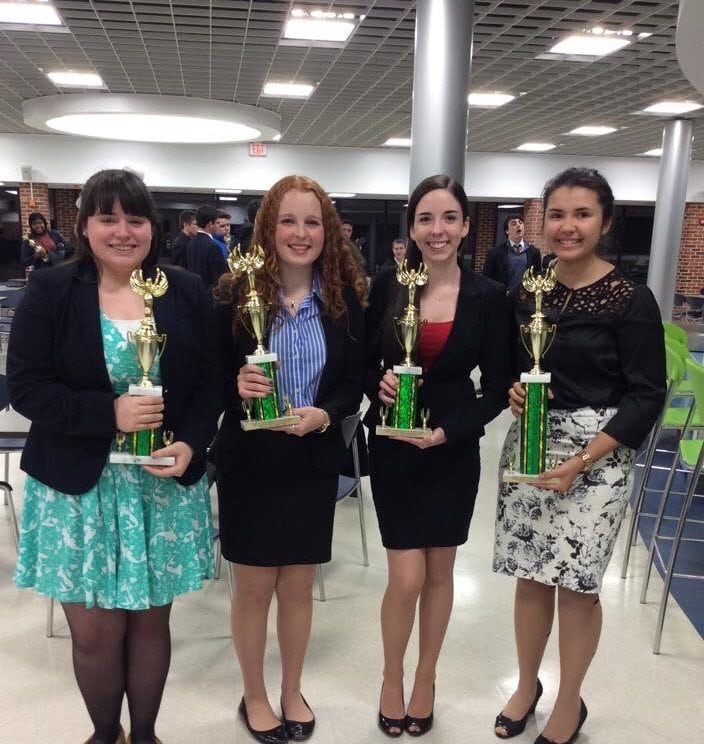 Article by Fiona Danyko, Class of 2016: The Kellenberg Memorial Speech and Debate team saw incredible achievement this past season, qualifying twenty two members for the New York State Forensic League’s State Shampionship, but the success did not end there. On Saturday March 7th, Kellenberg sent its best representatives from the speech team to compete in a tournament to qualify for the Catholic Forensic League National Tournament, to be held in Fort Lauderdale, Florida. The Long Island Catholic Forensic League sends only six qualifiers from each category to the tournament each year, making the competition for qualification extremely competitive. Students at the tournament all had their eyes on the ultimate goal of the trip to Fort Lauderdale, where they would compete against the best in the country.
After the three preliminary rounds have ended, scores from preliminary’s determine who will “break” to the final rounds. Juniors Maegan Cross and Fiona Danyko both broke in Oral Interpretation, a category Kellenberg has been particularly strong in this year. Freshman Kate Byrne broke in Drama, an impressive feat in a category mainly composed of upperclassmen. Danielle Santevecchi also competed in Drama, performing a piece titled “The Homecoming Queen,” about a girl who returns to her high school reunion and realizes that she might need to be more careful with what she wishes for. Danielle scored so well in her preliminary rounds that she automatically qualified for nationals, and came in first place in Drama.
The final rounds were competitive but successful for the Kellenberg team. Maegan Cross came in sixth place overall in Oral Interpretation, qualifying for nationals with her powerful pieces on topics ranging from self empowerment to unthinkable decisions. Fiona Danyko also qualified in Oral Interpretation, coming in fifth place. Fiona’s pieces include a poetry selection on mental disorders and a story of a girl who was accidentally kidnapped. Kate Byrne qualified in Drama, coming in sixth place overall. Kate’s piece is a captivating and frightening story on the consequences of child negligence. The four who qualified will be the first representatives Kellenberg has sent to the national tournament in three years. Their hard work and dedication to the Speech and Debate club has truly paid off, and the team looks forward to future successes for the club.
Categories: Activities, Kellenberg FeaturesApril 1, 2015
Tags: ActivitiesSpeech and Debate
Share this post
Share on FacebookShare on Facebook TweetShare on Twitter Pin itShare on Pinterest Share on LinkedInShare on LinkedIn